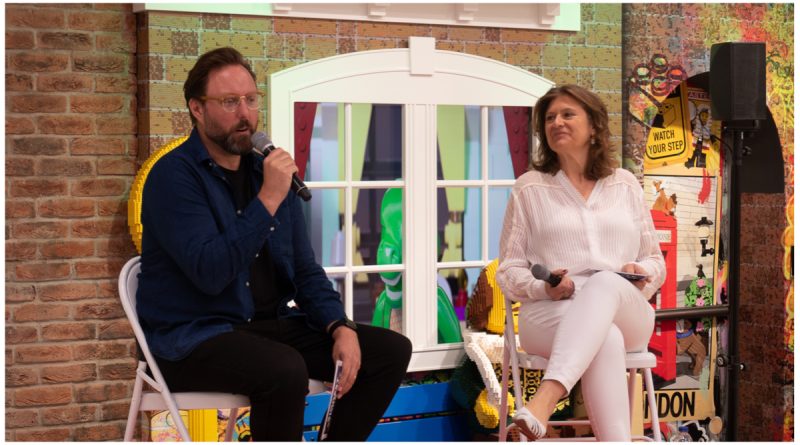 In an interview with Natali Stojovic, the Head of LEGO Retail talks about the importance of customers being able to discover physical product in stores.

Ahead of the grand re-opening of the Leicester Square flagship store, Natali Stojovic, Head of LEGO Retail, gave a presentation to the assembled media, and later Brick Fanatics caught up with her for an interview. Many times, she emphasised the desire to inspire creativity and hands-on play and highlighted the number of opportunities there were in the revamped store for children to interact.

In her presentation, she addressed the issue of on-line shopping becoming increasingly prevalent: “Well our research shows that physical stores are the one of most important experiences to discover our physical product and so for us it’s a key strategy to keep expanding stores, investing in retail spaces and really providing our shoppers hands-on experiences. We’ve done research over two years and they’ve told us they really want that.”

Natali continued: “…so we are creating the spaces to inspire creativity and inspire hands-on play and it’s a strong commitment to keep expanding our stores.”

Later, Brick Fanatics caught up with Natali, and started by asking whether, if the LEGO Group had known what they know about the current economic climate, two years ago, whether they would still have gone ahead?

“Absolutely.” said Natali, “I think this is… nothing’s changed… because, physical stores remain so important, particularly after the pandemic, people are so keen to get back in stores.  And this is a flagship store, so, it always will have relevance and an important role to play. So it’s actually really exciting to be opening, next week we’re opening Dublin. Munich later in the year, and we’ll keep expanding with our stores. Obviously we need to pay attention to costs, as does everyone else, but that’s still part of normal business, so it’s an integral part of our strategy.”

When asked about footfall before the store closed, and what the LEGO Group’s expectations were when it reopens, she was reticent to quote numbers, but said “We obviously will keep observing and see what it does, but it always has been a very busy store, you’ve seen the queues…  But now we’ve got 300 more square metres, so hopefully a lot more to see and to entertain people.  We didn’t do this really for the footfall in and of itself, it really is about offering the experiences.”

The Leicester Square store is the fifth to be based around the ‘Retailtainment’ concept after New York, Barcelona and Wangfujing and Hangzhou in China. Natali talked about the fact that the idea was scalable, so while a flagship store would get ‘everything’, others would still be able to incorporate elements. “So the concept…” she said, “obviously this is where we have a lot of space, but we’re rolling out the concept also to smaller stores, so Dublin will have elements of it. The look and feel you have here we will roll out to even the small Partner stores. It’s a concept with modular elements.”

With the store having a full complement of areas to customise LEGO purchases, including Build-A-Minifigure, Mosaic Maker and Minifigure Factory, plus the world’s first interactive storytelling zone, Brick Fanatics wondered what Natali thought would be most popular.

“Most popular in this one? I just know that the personalisation zones will be so busy, absolutely, people love it and they love to spend time and really engage, but I also do think, the play tables will be very busy, and then let’s see how people react to the storytelling, I mean I’m getting goosebumps when I see what’s in there, but the hands on play, people always love.  And then the Aston Martin is going to be quite something.”