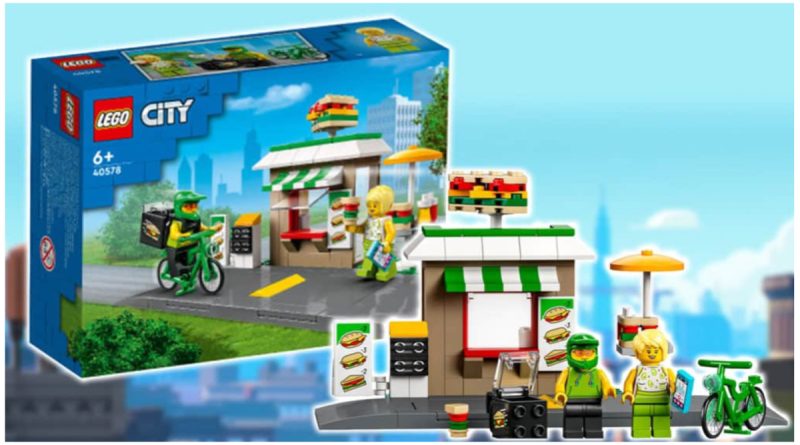 A new gift with purchase has surfaced on the LEGOLAND Japan website.  It’s a CITY-themed LEGO Sandwich Shop including two minifigures.

A Japanese LEGO fan site has spotted details of an upcoming GWP after they were published on a LEGOLAND Japan website.  Stonewars have posted that the site, stds.jp, found details of the new CITY-themed set, a Sandwich Shop, which reportedly will be available from September 16, with qualifying purchases of 12,000 yen or more. That equates to around £75, €87 or $87.

The set is numbered 40578 and while there is no piece count on the box art, the set looks to be in line with previous GWPs and seems to have around 150 pieces. It consists of a small Sandwich bar in tan bricks with an attractive green and white striped awning and the roof is topped off with an enormous sandwich on a pole. Two minifigures come with the set, the first of whom is a female shop worker who has a phone for taking orders and, unsurprisingly, a sandwich.

The second minifigure is a Deliveroo-style dispatch rider on a bicycle with a helmet and a large square box on his back which is common for delivery riders of this type. The set has a raised roadway in front of the shop, and is completed with a small umbrella covered stand with various condiments on it. A couple of plates with stickers are used to create display boards with the menu and food prices.

At present the set appears to be a Japan-only release, but these type of GWPs frequently become available in other territories, so could be one to watch out for in your local LEGO store or at LEGO.com.