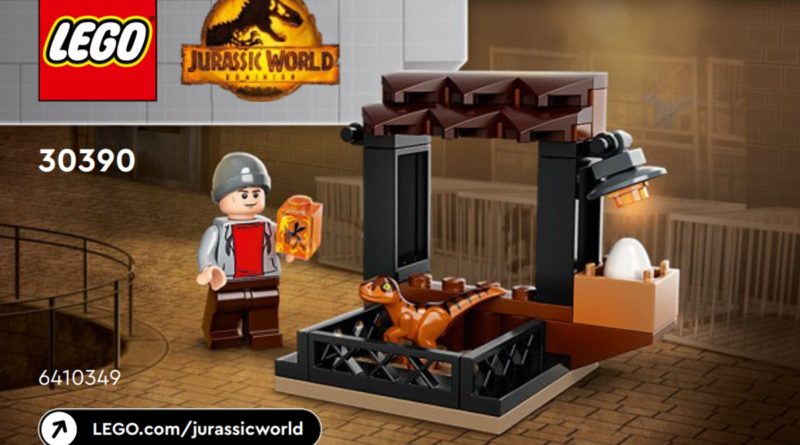 A new LEGO Jurassic World Dominion set has been revealed on the online store as it appears a polybag for the film has been designed.

While plot details for Jurassic World Dominion are still being kept under wraps, the range of LEGO sets – which was only just released yesterday – suggests that at least one of the scenes will be taking place in a likely illegal market selling dinosaurs.

The two sets that reference this are 76945 Atrociraptor Dinosaur: Bike Chase and 76948 T. rex & Atrociraptor Dinosaur Breakout, with dinosaurs in cages and pens. However, a third model has been revealed on the instructions database named 30390 Dinosaur Market. Thanks to this, a clear image of the build has also been showcased in the instructions manual.

Looking at the size of the instructions and set, as well as the numbering, it’s likely that this is a polybag, meaning it might be harder to track down unless it’s included in an offer on LEGO.com in the future.

Thankfully, there doesn’t appear to be anything exclusive in the model, as the infant dinosaur is a common design and the minifigure uses a combination of existing parts. Even the amber element is included in 76945 Atrociraptor Dinosaur: Bike Chase.

The full range of LEGO Jurassic World Dominion sets is now available on the official online store, including the largest in the wave – 76949 Giganotosaurus & Therizinosaurus Attack.

Support the work that Brick Fanatics does by purchasing your LEGO Jurassic World or Jurassic Park sets using our affiliate links.