With August 1 comes a whole host of new LEGO sets, including Star Wars, Harry Potter and Technic products. The blocky theme of Minecraft also continues, with four new sets added to the theme including a BrickHeadz twin pack.

Here are the new sets, along with the official LEGO product descriptions:

Dodge the slime shooter and defeat your opponent to claim the prize golden apple, and battle the killer bunny to get the healing potions and a chest containing a shield and bow. Enjoy hands-on Minecraft adventures with this LEGO Minecraft 21145 The Skull Arena set—designed for fans of the highly successful video game. Combine with other sets to create your own unique LEGO Minecraft universe. Also includes 2 player minifigures, each with their own unique Minecraft skin.

Construct a shelter with a bed, crafting table, furnace and a secret trapdoor for surprising unwelcome mobs. Then craft a stone sword and get ready to battle the skeleton army. Enjoy hands-on adventures with this LEGO Minecraft 21146 The Skeleton Attack set—designed for fans of the highly successful video game. Easily swap building sections to redesign this model, and combine with other sets to create your own unique LEGO Minecraft universe. Also includes a Steve minifigure, plus a red sheep, skeleton horseman and 2 skeleton figures.

Use the diamond pickaxe or activate the TNT function to mine obsidian and 7 types of ore, and venture through caves and mines with water and lavafalls. Battle an array of hostile mobs, including a cave spider, zombie, Creeper and silverfish that spawn when you mine the rock face! Enjoy hands-on adventures with this LEGO Minecraft set—designed for fans of the highly successful video game. Easily swap the modular sections to redesign the model, and combine it with other sets to create your own unique LEGO Minecraft universe. Also includes Alex and Steve minifigures, plus a bat figure. 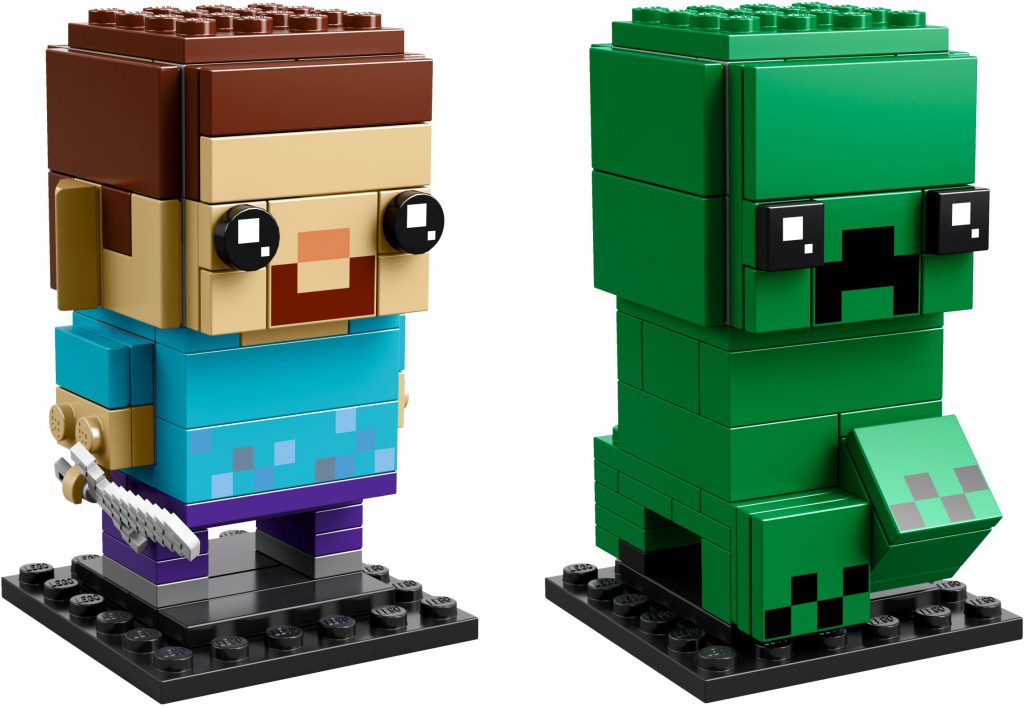 These LEGO BrickHeadz 41612 Steve and Creeper construction characters are fun to build using colorful LEGO bricks that recreate their 3D style and iconic details from the hit Minecraft™ game. Steve also has a detachable ‘diamond’ sword to defend himself against the Creeper and a pickaxe for finding ore. They both stand on a buildable collector’s baseplate for easy display in your home, office or any biome you like.