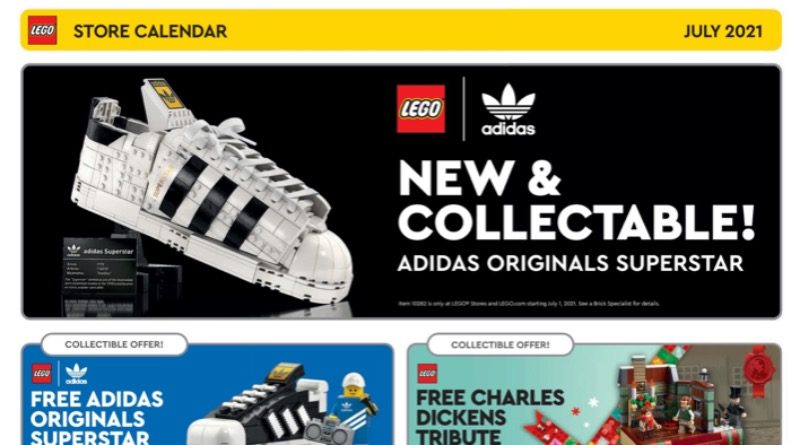 The LEGO Store calendar for July 2021 is now online, revealing all the new sets and deals we can expect to see through official channels next month.

Curiously, the US store calendar suggests that promo will run from July 1 through July 14, while the information we’ve received directly from the LEGO Group says that the offer will actually run until July 24. The most likely scenario, of course, is that stock will run out before we reach either of those dates.

The US calendar – which is usually a safe indicator of what to expect in the UK and Europe – has also revealed a handful of previously-unknown offers, including the return of 40410 Charles Dickens Tribute (originally available during the Black Friday shopping event in 2020) with purchases over $150.

That deal will apparently run from July 12 through July 18, which means there should be some crossover with 40486 Adidas Originals Superstar (if supplies hold out). From July 16 through July 25, you’ll also be able to take home either 30414 Emma’s Magical Box or 30568 Skater with any purchase above $40, while any purchase between today and August 8 will net you a buy-one-get-one-free voucher for LEGOLAND parks.

Even if you’re somehow caught up on June releases, there should be new stuff to tempt you into a purchase in July. Beyond 10282 Adidas Originals Superstar and the wide release of 21327 Typewriter (currently available through VIP early access), next month will bring us three new Monkie Kid sets and 43197 The Ice Castle.