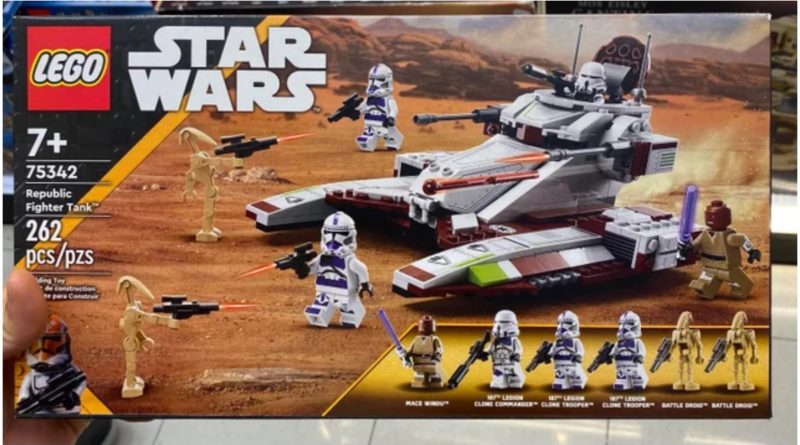 75342 Republic Fighter Tank – an upcoming release for The LEGO Star Wars range – has been discovered at a Mexican retailer, giving us a better look at this set.

Officially revealed on the online store recently, the set recreates a Republic vehicle from the prequel era of Star Wars. Although this particular vehicle has appeared in LEGO form before now, this one distinguishes itself with the inclusion of a new Mace Windu. It also includes three members of the 187th Legion – clone troopers differentiated by purple markings on their armour. Two clone troopers and a clone commander (which features a different helmet) appear here, as do a pair of standard battle droids. Mace himself is differentiated by additional arm printing, which is currently unique to this set.

The set’s discovery was posted to Reddit by user DanielCl11, who reportedly came across it in Guadalajara, Mexico. Within that region it retails for 1,099 Mexican pesos, which equates to just under £42, $55 or €50. However, it’s possible the final price of the site will be lower when it appears in these territories.

An official product listing for the set hasn’t appeared on LEGO.com yet. However, with the discovery of this set in the wild it seems likely that one will be along before too long. Until then, you can check out the other LEGO Star Wars sets on the site – including the soon-to-be released 75339 Death Star Trash Compactor.