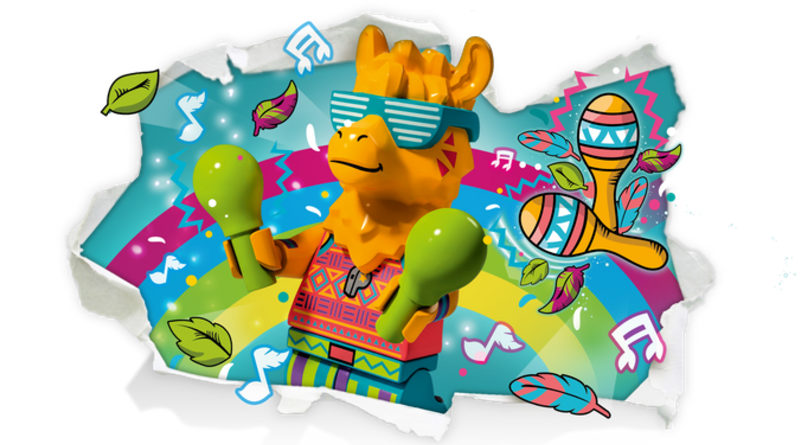 The first teaser for the upcoming LEGO Vidiyo theme has been revealed in what is sure to be music to fans’ ears.

LEGO Vidiyo is set to launch later this year, but very little is known about the upcoming theme. However, a new teaser found on the kid’s section of the LEGO website reveals a fun-looking minifigure from the theme.

The teaser appeared in clear view on the main section of the LEGO Kids Experience part of the US LEGO website and pictures a colourful Llama minifigure, bursting through a ripped paper effect.

Some text beneath the teaser confirms the name of the theme after it was teased in a LEGO catalogue. In the background, some visual effects such a rainbow, leaves, maracas and feather can be found while the new minifigure is front and centre.

The minifigure depicts a smiling Llama wearing stylish shades. The head is an entirely new piece. The Llama is holding a pair of green maracas and wearing a pair of striped legs and a tank top with a whistle around the neck.

LEGO Vidiyo is a partnership between the LEGO Group and the Universal Music Group. The theme is rumoured to use AR technology to allow builders to shoot their own music videos, triggered by a printed tile in the sets. Now we know that the theme will also contain at least one minifigure.