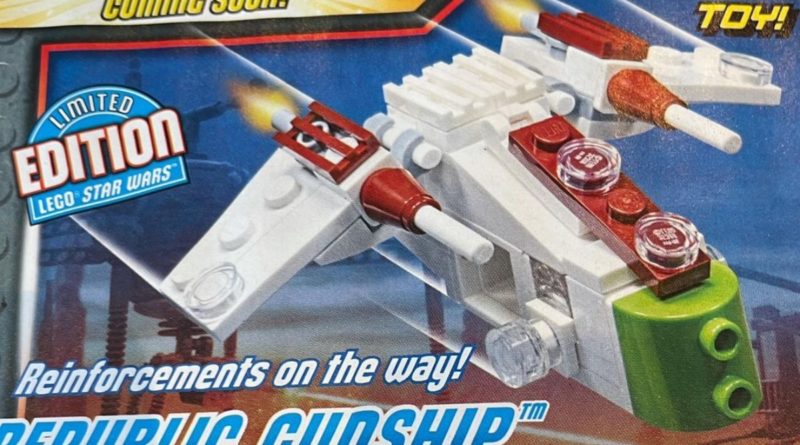 The latest issue of the official LEGO Star Wars magazine is out now – revealing that next month’s will include a more affordable Republic Gunship.

If this summer’s 75309 Republic Gunship is beyond your reach in terms of budget or display space, the foil-bagged freebie due in Issue 78 of Immediate Media’s LEGO Star Wars magazine may be just the ticket. Comprised of only 51 pieces, it’s a very decent representation of the Low-Altitude Assault Transport at mini-scale, with some especially imaginative part usage for the ball turrets.

Each issue of the LEGO Star Wars magazine retails for just £3.99 in the UK, which is just a little bit cheaper than 75309 Republic Gunship’s retail price of £329.99. You’ll be able to grab your copy of Issue 78 – along with the mini Gunship – from December. In the meantime, Issue 77 is available now, and includes a tiny Resistance A-wing from the Star Wars sequels.

This does mean yet another month without a minifigure-shaped freebie in the Star Wars mag, though, which will be a disappointment to character collectors. Previous issues have served up some pretty rare minifigures, including Bespin Luke Skywalker, Emperor Palpatine and Rey in her Rise of Skywalker garb.

Issue 79 could well see a return to minifigure freebies for 2022, but we won’t find out until Issue 78 lands on shelves. That may be pretty soon in Germany, which typically runs a few weeks ahead of the UK’s publication schedule, so keep an eye on Brick Fanatics for updates.