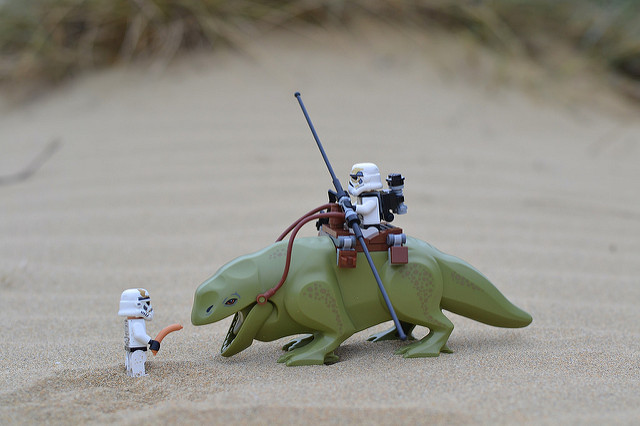 As you will know I love to create topical and of the moment builds, so I always do try and create a little something for this “special day” and have been doing so for a few years now, please do bear with me as some of the items your about to see were created “A long time ago” and were created before the Lego force was strong in me… Enough of the taglines and onto business. I’ll start with this years effort. I had great plans and ideas for this year, but as always I left it to late to create what I had envisioned and managed a watered down version. Still I was happy with one of the shots and even went a little “creative” with the photo editing.

The idea behind this build was that everyone had a days holiday to celebrate the 4th but as Darth was cleaning duties he had to stay aboard and swab the decks. I had hoped to light it up, but time was against me, still there’s always time and a different theme to reuse it on so maybe it may reappear lit up under a different guise sometime soon.

Star Wars day is a day for fun as you can see in the build below from 2013. Dressed as Superheroes with a few tunes and some bottles of Trooper Juice.

In 2014 there was tunes and beer but this time no dressing up !

Built for Star Wars day back in 2012 the crazy build below was a turning point for me, I posted it on Flickr and had all but forgotten about it until I saw a post on this very site, well the old website a few years later (http://old.brickfanatics.co.uk/introducing-the-lego-golden-brickies-awards)

Billed as a Lego’s first ever intergalactic national ‘Oscar-style’ awards just for fans! I had to find something to enter after reading that and also after reading  Win a year’s supply of LEGO® Star Wars™ goodies I tweeted it and didn’t think anything else about it……….

Until this invitation popped up in my Inbox a few weeks later.

I couldn’t say yes quick enough and after arranging time off work I was all set to go. And what a great day it was Below are a few pictures from the day and as you can see by the award I won the best build section. Sadly this didn’t become a regular event as I believe it should have, it certainly opened a few “Lego” doors for me and I met some great people from the AFOL scene who remain good friends to this day.

But as you know it’s not all about Star Wars day, below are a few other Star Wars themed efforts from me.