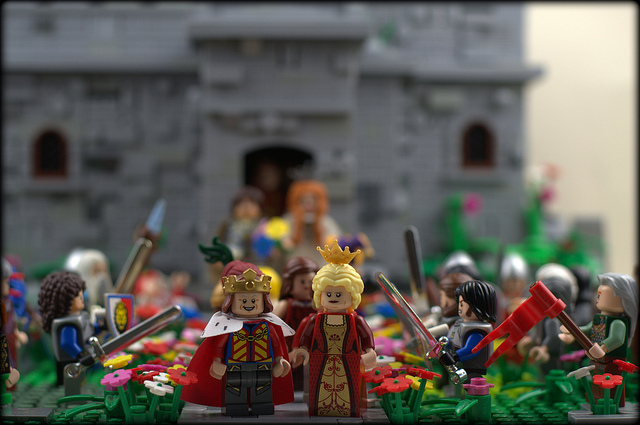 Welcome to another Nick’s Corner It’s been another week of building and bricklinking here at Minifignick HQ. I’ve now got a rough idea of what I’m going to build for the Westcountry Bricks show up in Exeter in June. So most of the next few months will be spent building. tweaking and rebuilding. I’ll try and post a few work in progress pictures here on Brickfanatics and show you it’s development.

This week I’m going to be showing you a build which first started life as a ruin, then a venue fit for a royal wedding and finally a zombie infested apocalyptic fight fest. I’d sort of planned the first two builds but when it was time for it breaking down I thought it maybe it could be “recycled” and used a third and final time I’m glad I did, as the third incarnation was featured in an edition of Bricks magazine but more of that later.

I live every near the edge of Dartmoor National Park and spend a lot of time walking and visiting the different stone artifacts, monuments and other ancient features. One place that had interested me for a while was The Church Of St Michel de Rupe which stands high on Brentor it’s one of the most striking examples of a church on a height in England and also the fourth smallest complete Parish church as well. After a visit here I was inspired to try and create something similar in brick form.

Having read about how the church had been restored on several occasions, once due to being struck by lighting I imagined how it would have looked if it hadn’t been restored and had slowly fallen into disrepair and the moor’s vegetation had taken hold. I also created a little back story for the build.

I named the building Dantisbourne Rouse and as you can see it was a sight for sore eyes. But as it stood on a strategic knoll and was reputed to stand on a area of great magical importance, King Rufus had been keen to secure it and the surrounding area for many a year,

Here it is, having just been discovered and secured by King Rufus and his men.

As you can see no expense was spared which upset many of the common folks as it was the high taxes they paid which had made it such a lavish affair.

The peasants had to look happy or feel the wrath of the King.

Still at least the Royal’s were enjoying themselves.

I’d had great fun creating and photographing this build and had displayed it for a few weeks, but as most AFOL’s will know need’s must and if you have another build in the pipeline and need those bricks it’s time to call in the brick separator. Once again Dantisbourne Rouse was destined to become a pile of bricks……..But after I’d toppled the tower something stopped me going any further with the destruction and after a few tweaks here and there another MOC was on the cards. Saved from the “Old Moc Brick Tub I Never Sort” work begun. I added a few of my favourite custom printed items and wrote a brief back story and it was game on.

What it had now turned into was some sort of apocalyptic zombie killing fest, some what different from it’s two earlier incarnations !

Even one of the chaps from Brickset was joining in the fun !

Is that a Friends Kitchen Mixer you have there ?

*Please note No Zombies were harmed during the making of this.

As I mentioned earlier on, this build was featured in Bricks magazine which for me was a very proud moment. It was a great feeling to in be in the same publication as some of my favourite builders, so as you can guess I was happy I’d saved Dantisbourne Rouse from the sorting bin and made that third build.