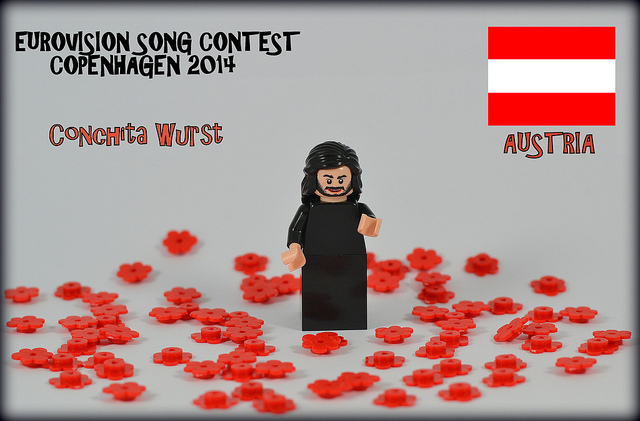 Welcome to another installment of  “Nick’s Corner” this time I’ll be focusing on one of my favourite types of builds Topical I’ll be featuring a few of my MOC’s and a few Minifigure setup’s I’ve created in this style.

I really enjoy creating topical builds as you need to be quick to catch the moment (and beat the other builders!) and also clever with your part usage as there isn’t time to place a Bricklink order or search around for bricks ,certain parts can make or break a build so you need to be on the ball. I always keep an eye out or ear open for news stories or event’s that I think will make a good build or events that I can create something to pay tribute to someone.

As you all know we have lost quite a few celebrities these last few months, the most recent being a favourite of mine Prince. So on Friday I set about creating a little something to pay tribute to him. With the Purple Rain period being one of my favourites I knew this was the period I would focus on ,I stuck the Purple Rain LP on my record player and started work. As I said earlier clever part usage can make a build work, so what better part for this than a purple guitar, using the twelfth Doctor’s body and legs, a custom printed head (With a tiny amount of Photoshop) and a Friends hairpiece Purple Prince was nearly complete apart from the iconic ruffles which really got me scratching my head on how I would pull these off. Hopefully I did, how I created these remain a secret, but let’s say there’s a King without his collar. After adding some text with a rather fitting font I hope you will agree it’s a job well done.

Sir Terry Pratchett is one of my favorite authors so when he passed away last year I created the build below. As Death appeared in many of the Discworld novels I thought it fitting that Death  should lead him to the next life. The skull is a custom item from Crazybricks.

I based the build below on three different film roles Christopher Lee played during his long career (Two of which are actual Lego Minifigures) for this tribute upon his death.

It’s not all about celebrities passing away, sometimes its about them behaving badly. As I said earlier you need to be quick when creating these builds as today’s news is tomorrow’s chip paper as was the case with one our Prince’s exploits in Vegas.

TV also appears a few times Do any of you remember a BBC show called “Top Gear” ? One of the host’s hit a producer or something I know this wasn’t well publicized so most of you won’t have heard about it, but here’s my take on the whole sorry affair.

Another story you may not of heard much about was Lego cutting ties with Shell after a Greenpeace video campaign.

Topical can also include things like the wonderful “Poppies at the Tower” Created by Paul Cummins and Tom Piper in 2014 to mark one hundred years since the start of Britian’s involvement in the First World War. When I created this I didn’t know just how crazy things would become, but my little Lego build got swept up in the euphoria which surrounded the installation and has been one of my most popular builds to date Not bad for a afternoons messing with the brick.

Being a big sports fun I’ve always got time to create something for sporting winners and stars.

(See if you can name all four, I’ve helped you with one)

And also celebrate things that remind one of days gone by. How many of you AFOL’s were also ZX Spectrum owners in your youth ?

and owned an “original” Benny The Spaceman 30 years ago

This was created for Benny’s 30th Birthday Bash! Over on Flickr The rules simple said to create a MOC showing Benny celebrating his 30th Anniversary or the aftermath. You can see what I decided upon.

Lastly I’d like to remind you of this and then leave it there. Until Next Week