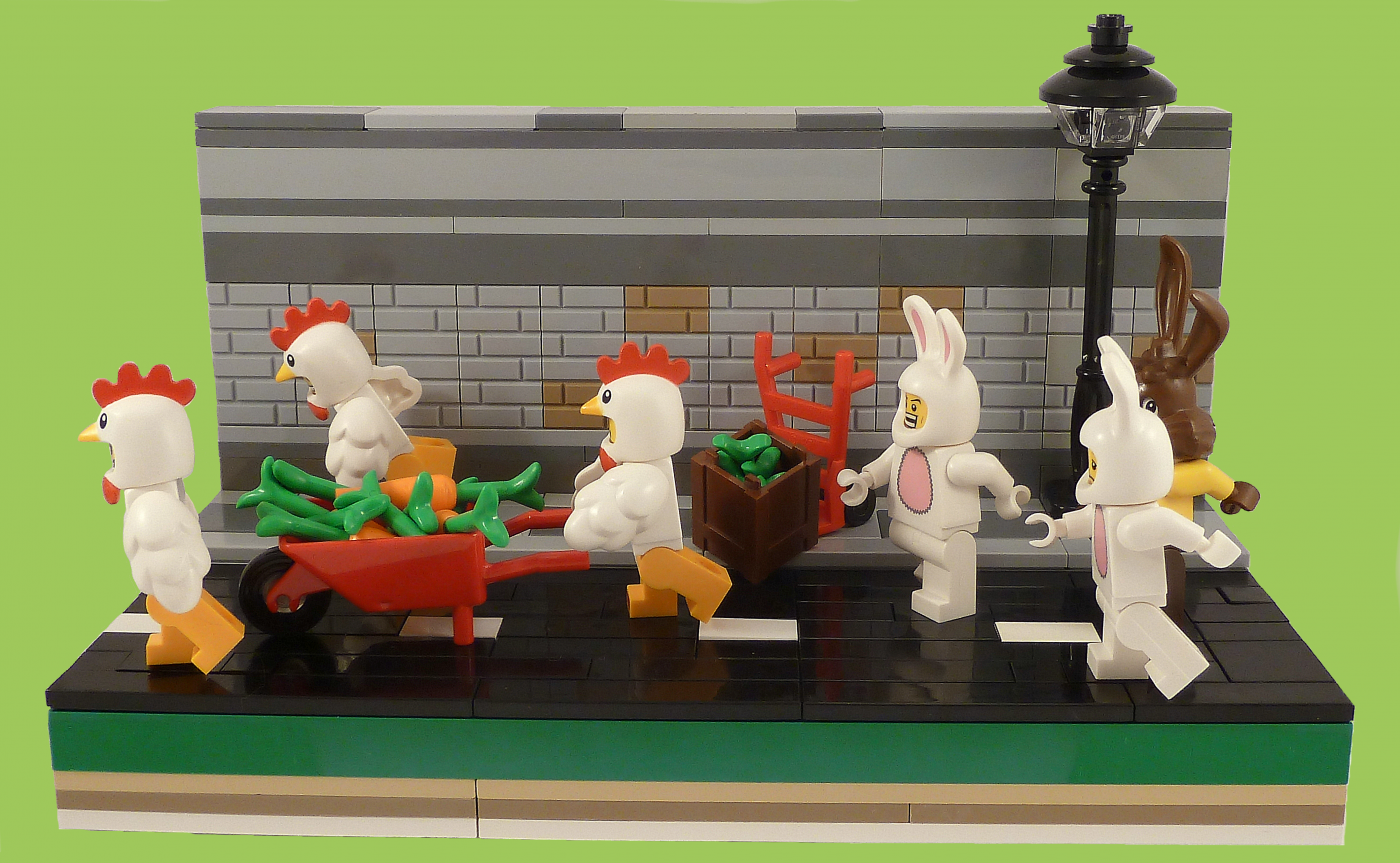 Last week I touched upon the Collectible Minifigure Series and showed you a few of my favourite figures in MOC’S I created using them. This week is a continuation of this and with it being the Easter Holidays  I thought I’d start off with a couple of the “Mascot” figures Bunny Suit Guy & Chicken Suit Guy and as always ramble on to something else stopping for breath every now and again. As with all of the mascot figures these two are now commanding silly money over on E-Bay thankfully Chicken Suit Guy has just been re-issued this month and was “given” away via Lego.Com and in Sainburys stores so you can now get it more cheaply, (for the moment).

This build was one a few I did about the Bunnies and Chickens at war over the bunnies carrots Check out my Flickr page for the others.

Also making an appearance in this MOC is the rather sort after Nesquick Bunny He only appeared in two polybag’s in 2001 Whilst writing this I checked the current prices on Bricklink and he’s going for £27+ used and £41+ new so if you do have one “Look after that bunny !”

A somewhat misunderstood Collectible figure was the sad clown from Series 10 To him everything seems like a tragedy, maybe he’s only truly happy when he’s completely miserable I myself aren’t 100% sure. But even my MOC attempts to cheer him up didn’t seem to work. Surely a series 1 clown could put a smile on anyone’s acrylonitrile butadiene styrene face ?

Another lot of miserable looking figures were the Computer Geeks, sorry I mean Computer Programmers from Series 7 Not even finding something in the bottom of your coffee mug could make these chaps break into a smile.

Thankfully “Where’s My Pant’s” guy from the Lego Movie Series had a beaming smile even if he couldn’t spot his own pants from a selection of forty that were right behind him.

This rather colourful build was built just after seeing the Lego Movie which I have to say is still one of my favourite films and I can’t wait for the Lego Batman Movie. Having seen a couple of the trailers here on the Brickfanatics website it’s looking like another great film in the making.

Another “Happy Go Lucky” minifigure was the delightful Series 11 Gingerbread man. I’m sure the one in this build wasn’t cooked quite enough as he didn’t get very far, and thankfully as you can see from the next picture he lived “Happily Ever After” with the rest of his family.

The Team GB Series (8909) were only available in the UK and were produced to celebrate the 2012 London Olympic’s because of their limited release, these are also sort after figures, there’s rumors about that a set of figures of the German Euro 2016 team are to be produced Series 71014 ? Do keep checking back here on Brickfanatics to see if these do become reality I really do hope so as I’ve got a few plans for them I just need to find a friend in Germany now. Anyway here’s a build I created with the horse rider from the Olympic Series.

I’m going to finish this weeks ramblings and let you get back to those Easter egg’s with one of the odder figures Series figures the Cyclops from series 9 He’s even now gone himself a girlfriend. Not sure if it was anything to do with the eye test I put him through in this build. Anyway as you can see they have made a really great couple.

Looks like it was love at first sight with these two