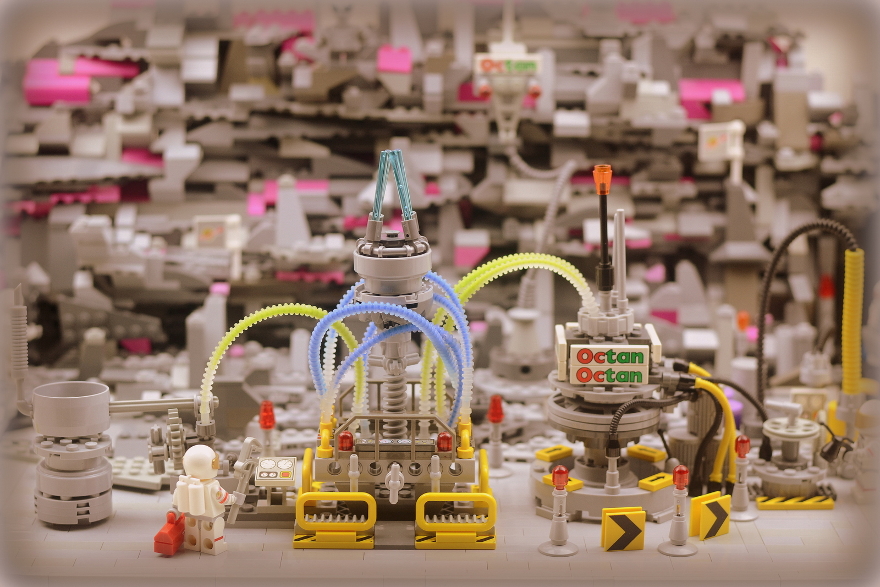 This weeks MOC has somewhat of a “Spacey” feel about it, as I’ve said before I do try my hand at any type/style of build and space isn’t something I’ve really touched upon in a large scale. Every time I bump into my Lego buddy Pete, (you may have heard of him he created some Exo-Suit thingy and wrote a book, tall chap) suggests I have a go and create something along the lines of Space and get right into the build with my photography so this was for him and also a “secret” competition, but more about that another week.

As you all know nothing I build is really planned it just sort of “evolves” and this was the case here I knew I wanted to go mad with a few greebles (this is fine detailing which is added to a build to make it appear more complex, and more visually interesting) and as you can see below I did, I really enjoyed adding all those little details but did have to rein it in a little, I’m sure if it was created for real those bits wouldn’t do a lot in the Octan plant but sure do look good in the build.

I’m really pleased with how both the build and the shot above turned out It was the feel I wanted to create when I first started the build so have entered it for the competition. I did take a few other “old school” shots of the build just to show it in it’s whole glory, but will definitely now start using more of these atmospheric shots in the future.