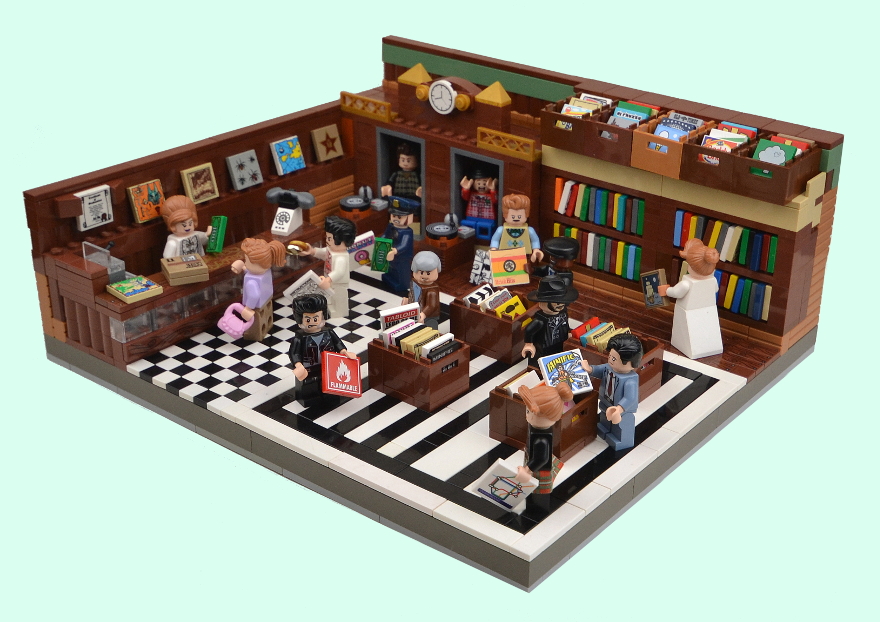 I’ve been a fan of the Brick Fanatics site for a few years now so when Rich asked me if I’d like to have a weekly slot I didn’t hesitate and jumped at the chance. “So what do you want me to write about” I asked him. “You have a free pass to write anything you want” was his reply. So here it is: my plan is to write about my builds old and new, the background behind them, how they evolved, problems I encountered as well as building techniques. I hope you enjoy it and most of all, that it gives you inspiration to create something of your own.
The 1950’s Record Store

Of all my creations this is still one of my favourites and the one which has gained some of the most interest. I hadn’t built much in the previous weeks and being a big fan of vinyl I felt I had to create something for Record Store Day 2015 (this is a celebration of independent record stores and vinyl which first started in 2007, held on the third Saturday of April every year). So I set about this, unsure of what I was going to do. Many of you will have seen the fantastic record shop MOC which Eldeeem created in 2014 (https://flic.kr/p/gXijFE) and I wanted to do something along these lines but knew, of course, that whatever I did would likely be compared to his build, so it needed a different approach. After I little thought I decided to put a little 1950’s twist on it and so it began.

Anything I create isn’t really planned but rather it just evolves. I call myself an organic builder and this is what happened with this build. I knew that I had to put some listening booths in it somewhere after being told about them by my parents. These were simple to create but I did have to do a little research and of course use a little poetic license to get them at minifig scale and right for the build. As soon as these were built the rest started to take shape.

As with all of my builds I enjoy adding loads of details and this was an ideal opportunity to use many of the printed tiles I’ve collected over the years – some custom printed, others from sets and collectable series minifigures. I enjoy knowing that people may have to look at it a few times to notice everything.

As you also may notice I only used fleshy heads. I think this adds greater realism but can also throw up problems as there’s a smaller range to choose from and that means less expressions to play with. But, as with the tiles, custom printing is changing this and for me I don’t mind using custom items here and there to add more detail.

Once I’m happy with the build the next step is the setting up and posing of the minifigures. This can make or break a build so careful planning of who goes where, and what they are doing helps. After I’m happy I’ve got it looking right it’s time to set it up in my ‘studio’ and get some pictures.

I’ll go into more detail next time so, until then, happy building and “Play Well”.