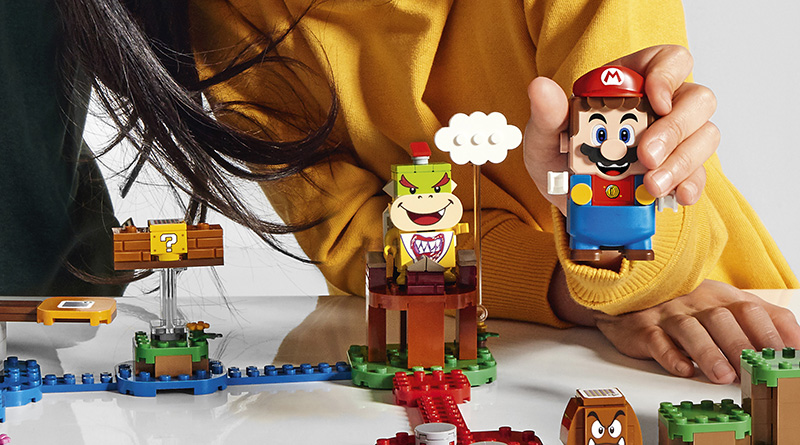 The Digital Design Lead on LEGO Super Mario has talked about how the new game-based LEGO theme was developed.

LEGO Super Mario Digital Design Lead Jonathan Bennink is the man who was responsible for developing the newly announced LEGO theme. That includes the main aspect that the video tease focused on, the Mario figure.

In an interview with the Brothers Brick, Jonathan has revealed some of the development process behind the figure and explained how a few of the toy’s features will work. Surprisingly, the Mario figure came about before the actual gameplay:

“About half a year into the project we made this first prototype of an interactive Mario figure. I hope one day we get to share this with the world because I think it would be quite interesting for people to know where it came from and how it evolved. But it was basically just a tiny little brick, maybe four modules high with a screen and speakers that we put a cap on and paint red. Once we put the cap on, we were all like, ‘Yeah, that’s Mario!’ and we instantly fell in love with him as an interactive LEGO character.

“But we didn’t know exactly what to do with him and how to make the most of the functionality. For that, we worked with Nintendo and play-tested with kids for quite a few iterations until we solidified the idea of building levels. Essentially, you can’t go wrong building levels but certain combinations and tricks will make the level better and get more coins from it. Building levels was probably the biggest revelation of the project because that is really where the core LEGO play comes in.”

In terms of how the figure works, the interview reveals that Mario has a sensor on the bottom, which can read barcodes and detect colours. The barcodes will be pre-applied stickers on 2×2 tiles in the sets.

He admits that until play testing and development took place, Mario as a figure was something of a gimmick. “In the beginning, we just had this Mario prototype that was a little bit gimmicky like some of the other tech toys out there that are fun to play with for a few hours but wear off after.

“That’s where Nintendo’s expertise and the longevity of the level building concept comes in. You spend a lot of time contemplating how you are going to build a level, how Mario will react, how he is going to collect coins and what your final coin score will be.”

The designer is tight-lipped about what is coming next, refusing to comment on minifigure based products or what sets will be available at launch. He does hint at further Nintendo characters getting the same treatment though: “… I can say that we haven’t worked for four years to release just one wave of products. We hope to have a long and fruitful relationship with Nintendo and their IPs, and we are really looking forward to working with them on a longer-term.”

One LEGO product that fans may get a feel for when looking at LEGO Super Mario is LEGO Dimensions – both sought to combine video game play with physical LEGO items, both require the player to purchase a specific product to unlock the rest. It is not a coincidence, as Jonathan worked on that very theme.

“I worked on LEGO Dimensions for the first two [years] then got the creative lead position for the Nintendo partnership. To work as a LEGO designer is super cool, but then to work with Nintendo is a dream come true–a dream I didn’t even know I had! I’m excited to see how the world is reacting to LEGO Super Mario and be able to tell my friends and family what I’ve been working on for four years.”

Four years is well beyond the usual development for a LEGO theme, perhaps due to the combination of digital gameplay and physical LEGO bricks.

Read the interview in full at the Brothers Brick.