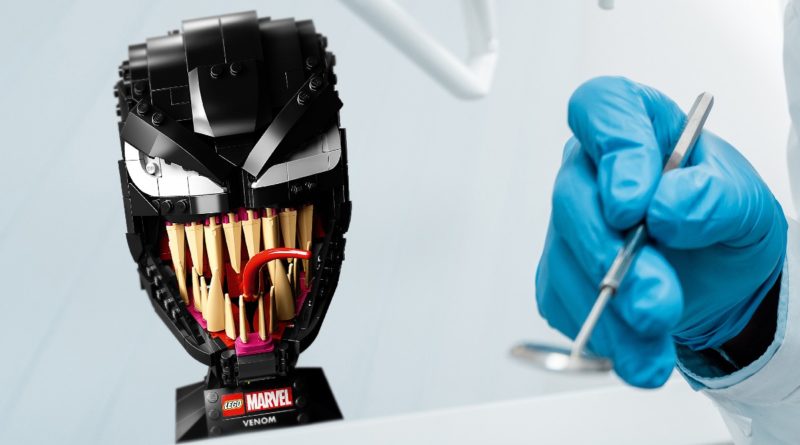 The LEGO Group has suggested a variety of ways to display your copy of LEGO Marvel 76187 Venom, and maybe even 76199 Carnage.

LEGO Marvel 76187 Venom is now available on the official online store but with the accompanying movie only recently arriving in cinemas, and only in certain territories, a few ways to showcase your model have been suggested.

The LEGO Group shared the images on Twitter, each featuring an official picture of 76187 Venom placed in a location that may provide a strange, but a suitable amount of contrast to the model. From the home to the office, it turns out that the brick-built symbiote can fit in anywhere.

Whilst the latter three images show the Venom build on brightly coloured shelves around what is likely homes – including beside a tea set and a stuffed rabbit – the first displays the head in a dental clinic, a grinning smile demonstrating what might happen to your teeth without proper care.

LEGO Marvel 76187 Venom is available now from the official online store, and in physical locations too. The partner to the set, 76199 Carnage, is also out in conjunction with the release of Venom: Let there be Carnage. The movie is now showing in cinemas in the US but those of you in the UK will need to wait until October 15 to see the sequel.

Both models form part of the multi-theme LEGO Helmet Collection, which includes builds such as 75304 Darth Vader Helmet as well as unique prop recreations like 76191 Infinity Gauntlet. Marvel is rumoured to be recieving a variety of new sets in 2022, including a buildable suit of Iron Man armour.