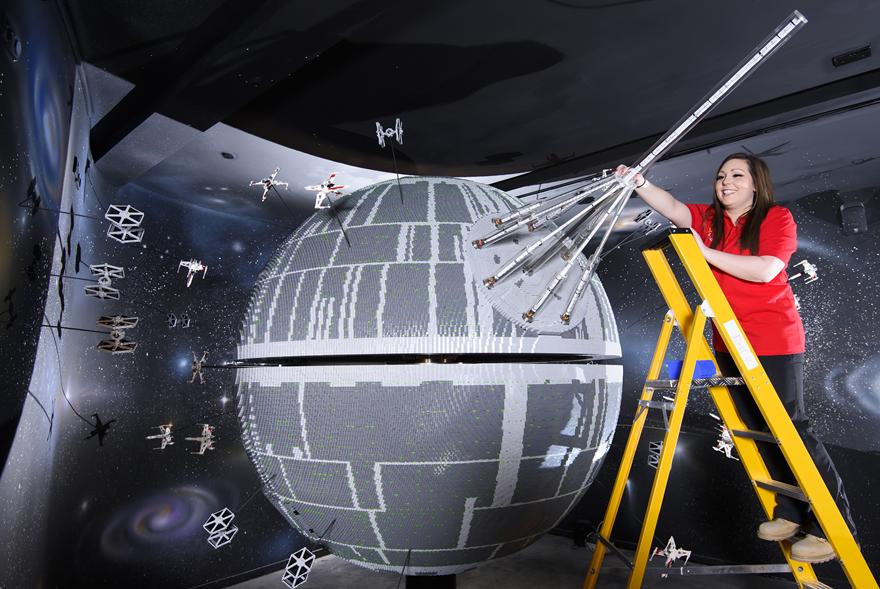 One of the world’s biggest ever LEGO® Star Wars™ models installed at the LEGOLAND® Windsor resort. Last pieces put in place on 500,000 LEGO® brick Death Star.

Monday 22 February 2016. One of the most impressive and biggest LEGO® Star Wars™ models ever created – a 500,000 brick LEGO® Star Wars™ recreation of The Empire’s ultimate super weapon, The Death Star – has been installed at the
LEGOLAND® Windsor Resort. The operation took three days as the massive new 2.4 metre wide, 3 metre high creation was carefully hoisted into position and the final bricks and scenes were put in place. The hefty 860kg perfectly spherical model took 15 Model Makers three months to build and will be the centrepiece of an epic new finale at the LEGO®Star Wars™ Miniland Model Display when the Resort opens on 11 March.

The dramatic scene, which depicts the Rebel Alliance attack on the moon sized space station in Star Wars: Episode IV A New Hope, also features 16 Alliance ships swooping in to destroy it and a series of animated scenes from the movie, including the famous trash compactor scene and Obi Wan Kenobi’s Lightsaber duel with Darth Vader. Guests will be able to trigger special effects and bring the scene to life with sound and light effects.

The new area comprises 651,086 individual bricks in total and will be a thrilling finale to the 1.5 million brick LEGO® Star Wars™ Miniland Model Display which brings to life iconic Star Wars™ scenes from the Millennium Falcon rising over the desert planet Tatooine (with the Cantina band playing), to Imperial AT-ATs on the icy planet Hoth and Ewoks in their forest home of Endor.