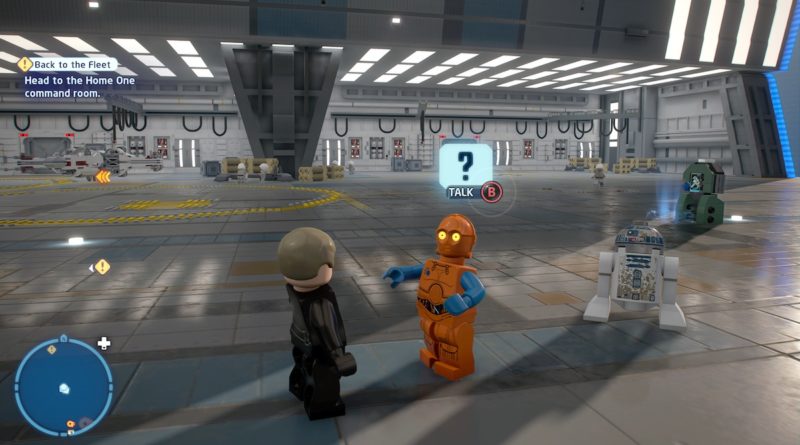 A helpful new droid in LEGO Star Wars: The Skywalker Saga has a much richer secret origin than first appearances may suggest.

We previously reported that LEGO Star Wars: The Skywalker Saga features a new droid called H1-NT. The character appears throughout all of the 24 open worlds in the game, handing out useful tips and advice in a dry and fairly downbeat voice.

Jaded H1-NT is there to help guide players through a LEGO galaxy far, far away, offering insights into how to navigate the game’s many menus and features. The protocol droid can often be found near the main landing pad in open world areas and is on hand to help struggling players if they need assistance.

There’s much more to H1-NT than meets the eye though. For starters the droid’s orange body and blue arms mirror the look of developer TT Games’ current company logo. A closer inspection of H1-NT’s chest also reveals a strange blue paw print logo. This refers to a character created for the third Traveller’s Tales Productions logo, back before the developer created its own publishing division.

The furry animal in question was designed by concept artist Rodney Matthews, who first worked on the character for an aborted Doctor Who video game. Following a call with Traveller’s Tales’ Jon Burton, the character was further evolved as the company’s logo and was also intended for inclusion in a game called Haven: Call of the King.

Matthews has mentioned that the look of the furry critter predated that of Sony’s Ratchet (from the Ratchet and Clank games) by at least a year, although the resemblance is certainly uncanny. The logo character goes by the nickname ‘Raccoon on the Cliff’ and its influence continues to live on thanks to its blue paw print as part of the unique design of H1-NT.

LEGO Star Wars: The Skywalker Saga is available to purchase now and has already smashed sales charts in the UK. Find out what we thought of the game in our in-depth review here.

3 thoughts on “The secret origin of LEGO Star Wars: The Skywalker Saga’s H1-NT”