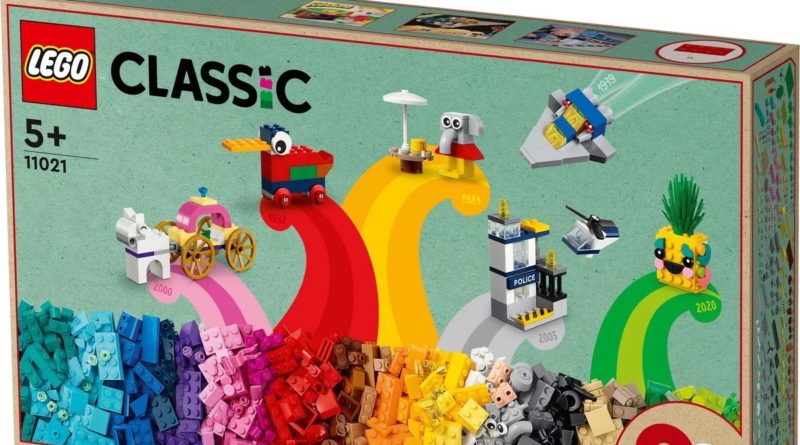 The LEGO Group’s growing list of packaging errors now extends to its first 90th anniversary model, which gets the release date wrong for one of its classic sets.

Everyone makes mistakes – that’s why pencils have erasers. But it’s going to take a little more than an eraser to rectify 11021 90 Years of Play’s packaging, which joins 75309 Republic Gunship and 75324 Dark Trooper Attack’s box art in featuring an error that wasn’t caught before the set went into production.

Last year’s Ultimate Collector Series set mistakenly used the Imperial rather than Republic logo, while 75324 Dark Trooper Attack’s initial print run displays its droid minifigures with their torsos the wrong way around. Both of those feel like easy mistakes to make in the grand scheme of things, but 11021 90 Years of Play’s error is a little more egregious.

That’s only because the mistake in question concerns the LEGO Group’s own history – this is a set celebrating the company’s 90th anniversary, after all – and so feels like the kind of thing it should really have had a handle on. The Classic set recreates iconic LEGO toys and models from across the past nine decades, including Friends’ 41340 Friendship House.

That 722-piece mini-doll set originally hit shelves on January 1, 2018 – but the reverse of the box art for 11021 90 Years of Play, as revealed by an online retailer last week, proclaims that it actually launched in 2017. Okay, grand scheme of things, it’s not a ruinous error, and doesn’t impact the contents of the set in any way.

And yet, it’s an issue that’s become increasingly symptomatic of the LEGO Group over the past few years, which isn’t especially ideal when it’s trying to celebrate its 90th birthday. It’s also not exclusive to packaging: both 76391 Hogwarts Icons Collectors’ Edition and 75275 A-wing Starfighter feature errors on their prints or stickers, to give two recent examples.

It’s unlikely 11021 90 Years of Play’s packaging will be fixed in time for launch, but 41340 Friendship House’s release date could be corrected for future print runs. We’re waiting on comment from the LEGO Group.