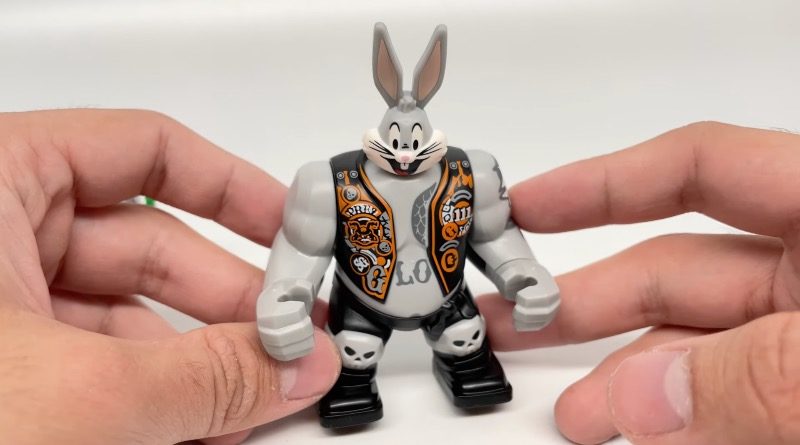 Welcome to 2021, where YouTubers pay $170 for a retired LEGO NINJAGO set just to recreate a meme – with weirdly brilliant results.

The imminent debut of 71030 Looney Tunes Collectible Minifigures has opened up all kinds of possibilities for brand new characters, including the classic superhero Green Loontern. But YouTuber just2good had something a little different in mind when he spotted Bugs Bunny.

Before we go on, it’s worth heading over to Know Your Meme, a website that takes documenting the origins of memes probably far too seriously. It’s helpful in this situation, though, because before watching Justin’s video, you’ll need to know why Big Chungus is such a big deal.

To briefly summarise: imagine Bugs Bunny, but he’s eaten possibly one too many carrots. The body-shaming rabbit exaggerated his appearance (this is a cartoon, remember) to mock a portly Elmer Fudd in a 1941 short, Wabbit Twouble, which you can check out on YouTube here.

The term Chungus was actually coined separately to that short sometime in 2012, but the two were married together in 2018 by an anonymous redditor. The image of an overweight Bugs Bunny as Big Chungus has since passed into the stuff of meme legend.

We’ll stop explaining memes now, because it makes us feel approximately a million years old, and just dive into the meat of why it’s relevant: 71030 Looney Tunes has given us the opportunity to create a perfect, purist LEGO version of Big Chungus with Bugs Bunny’s head. And best of all, the appropriate body part already exists.

Unfortunately, it also belongs to Killow, a NINJAGO villain exclusively available in 2018’s 70642 Killow vs. Samurai X. That set has now retired and soared in price on the aftermarket, largely thanks to the Killow bigfig, which alone commands a minimum price of £65.34 new on BrickLink.

For Justin, however, price is clearly no barrier when it comes to memes. And because he has a self-imposed policy of only buying new-in-box sets, the YouTuber went all-in on 70642 Killow vs. Samurai X, which Justin claims sells for as much as $170. (The cheapest copy on BrickLink in the US is currently listed for $155, so he’s not far off.)

Hit play on the video above to see what happens next, but essentially: Killow comes out, Bugs Bunny’s head goes on, and LEGO Big Chungus is born. It’s way funnier than it has any right to be – probably because we weren’t the one spending $170 for a meme – and despite his skull-capped knees, tattoos and groovy biker jacket, Killow’s body actually works pretty well.

If you’d like to follow in Justin’s footsteps (perhaps you already own 70642 Killow vs. Samurai X, you lucky thing), you’ll be able to get your hands on LEGO Bugs Bunny from Monday April 26, when 71030 Looney Tunes Collectible Minifigures launches at LEGO.com and in stores. In the meantime, check out our in-depth review right here.