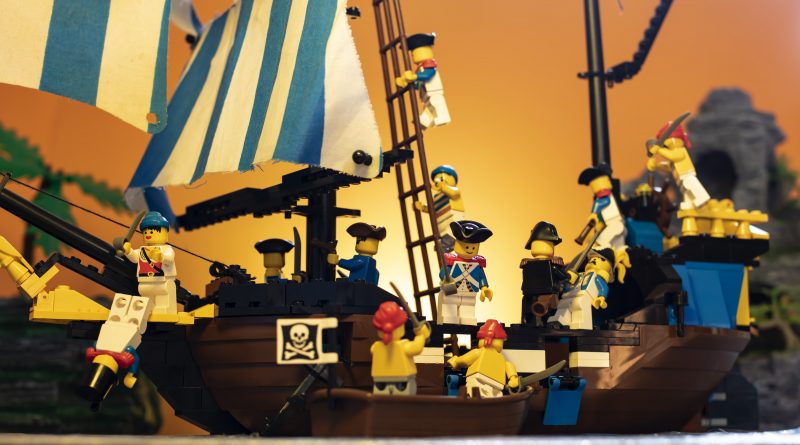 Revealing how he achieved compositions that evoke the classic LEGO Pirates artwork, Dimitri Nicomanis shares the secrets of his Brick Fanatics Magazine photoshoot

In the first part of this feature, Dimitri reveals how he recreated classic treasure-hunting inspired artwork

This series of LEGO Pirates images was my most ambitious to date, having been 30 years in the making. For this one, I needed to recreate a giant seascape with 6274 Caribbean Clipper in the background, the pirate crew in the foreground and some Blue Coats loading up treasure in the back. I again turned to coloured card for the backdrop, this time using orange to create the look of a sky at sunset with my small light hidden behind the Clipper replicating the setting sun.

To achieve the look of an ocean, cling film was wrapped over dark blue coloured card and laid out across the table. I pinched it here and there to give the effects of waves. I made a small beach using some more of my sand and posed the Blue Coats loading up the treasure into their small row boat, matching the original poster.

So with the good guys setup for the shot, it was time for the pirate crew. Usually posing minifigures to make them look like they are running is easy, just attach them to a stud and away you go – but it is slightly trickier when using real rocks, at an angle. To keep them in position I used a little bit of White Tac to stick them into place and then ‘painted’ it out in Photoshop.

I should just mention at this point that all of these shots were achieved in camera, without any Photoshop other than removing a little bit of White Tac here and there. Back in 1989 the original artwork was achieved in camera and I wanted to stay as faithful to the source material as possible.

Using this sunset setup I also shot a number of different scenes I conceived myself, such as the pirate crew finding a huge bounty on a desert island, the blue coats loading up some treasure and of course a giant sea battle – it wouldn’t do justice to the Pirates theme without that. To add some depth to the sea battle I used some more props I had bought at the local aquarium along with some LEGO elements. I quite often mix LEGO elements with real world items in my photography as I really feel it brings our two worlds together.

As well as shooting the sets and minifigures I wanted to find a way to include some of the iconic animals that were introduced in the theme, namely the monkey and shark. The classic 6270 Forbidden Island set came with both so it was the perfect setting for a swashbuckling sword fight on a rope bridge, complete with a monkey scurrying out of the way. I also shot a dangerous encounter with a great white shark.

Throughout the photoshoot I absolutely loved revisiting some of my most cherished childhood LEGO sets and minifigures. They have lost none of their innocence and charm, I can’t help but smile when I see them. I really pushed myself as to what I could achieve and I’m incredibly proud of these shots. I hope reading about the process that went into creating them is as enjoyable as it was to shoot them.

To think that these shots will accompany an interview with the original LEGO designer responsible for the Pirates theme, Niels Milan Pedersen, has somewhat blown my mind – I wonder what my eight-year-old self would have thought if I could tell him? Shiver me timbers, I imagine…

Brick Fanatics Magazine Issue 10 is available to buy as a single issue or as part of a great value subscription package. 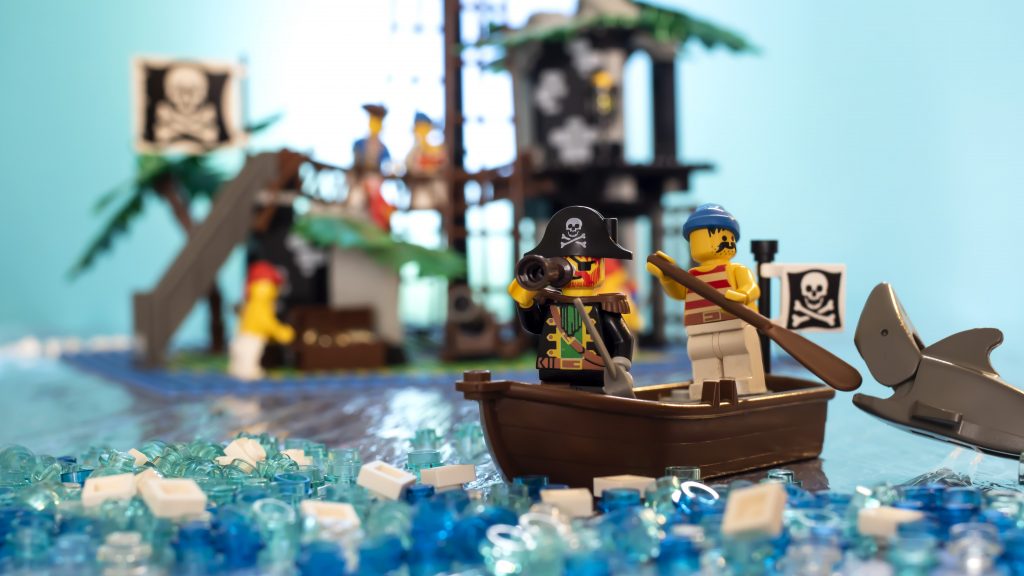