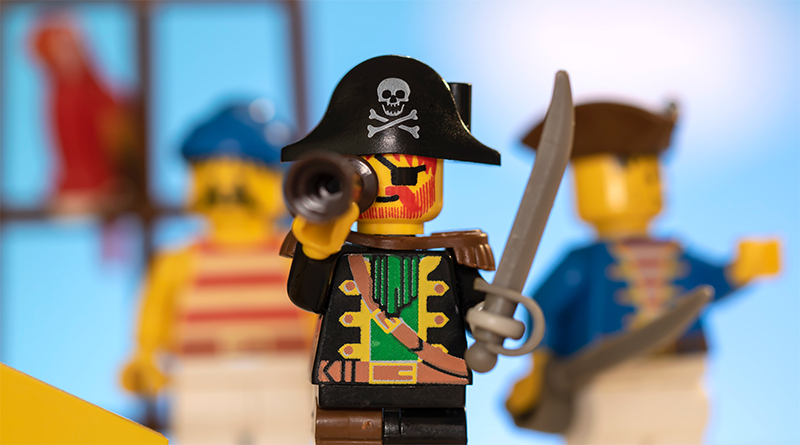 LEGO Pirates is easily my all-time favourite theme. The original promotional artwork was so evocative, as a child it conjured up romantic images of far away desert islands, buried treasure and epic sea battles. It is now 30 years on and my love affair with Captain Red Beard and his crew of scurvy sea dogs is still going as strong today as when I was eight years old.

I still ‘play’ with those sets today, albeit in a slightly more mature way. As a LEGO photographer I knew I wanted to do something special for the 30th anniversary of Pirates (it really is one anniversary after the next for LEGO fans at the moment) and there is no better way to celebrate than digging out my old sets and recreating some of my favourite vintage Pirates promotional material, as well as creating some original artwork of my own.

My first port of call, pun intended, was to head to the beach to see what I could capture. Having never tried outdoors photography before, it was a blast – but after shooting a few test shots I realised the scaling was completely off. Our world is just too large for minifigures to inhabit and the shots just felt like I had placed LEGO minifigures on a full sized beach. As fun as it was shooting at the seaside, especially chatting to all the curious passerbys, I quickly ditched the idea and decided to create my own beach on my preferred place of shooting – my dining room table.

Shooting indoors has the advantage of being able to control every element within the frame as well as having full command of the lighting. This is essential in recreating the night time look of Captain Red Beard in the cave and the iconic buried treasure poster that were featured in the 1989 LEGO catalogues.

In order to get the authentic looking cave walls and cliff face I purchased a number of rocks from a local aquarium. They are perfectly scaled as they are intended for small fish tanks, even better they are actually from the sea – you can’t get more authentic than that. The sand was bought from a local pet shop, it is designed for lizard terrariums and so is good quality, fine and very clean.

To replicate the beautiful lighting of the original shot I first angled a small light through a hole in one of the rocks I was using for the cave entrance and placed a yellow gel in front to mimic bright daylight streaming in from outside. To achieve the blue tones I simply placed a blue gel over the top of the entire setup and lit from above. I not only shot the recreation of the original poster but grabbed a quick shot of Captain Red Beard watching on as one of his crew dig up the buried loot.

For my rendition of the buried treasure poster, which I still think is my favourite LEGO promotional artwork of all time, I again used the sand but this time used the rocks as the cliff face rather than the walls of a cave. For the night sky I used a piece of dark blue card and shone a small light up against it. This gave the sky a slight gradient of colour, which is far more realistic than just a solid dark blue backdrop.

To show the waves lapping onto the shore I used a small piece of cling film, slightly crunched up to add some texture. I angled the light at the back so it just hit the top of the cling film, which gave the effect of waves. Again I used the blue gel to give the shot a night time feel. For my own interpretation of this scene I thought it would be quite fun to have the Pirate crew spying on the Blue Coats as they loaded their booty onto their boat.

Brick Fanatics Magazine Issue 10 is available to buy as a single issue or as part of a great value subscription package. 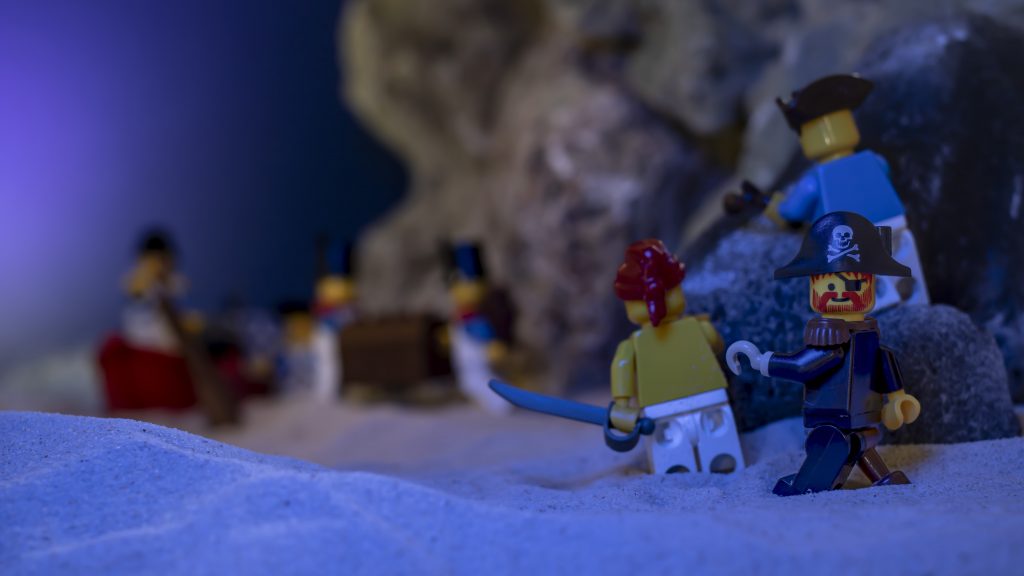