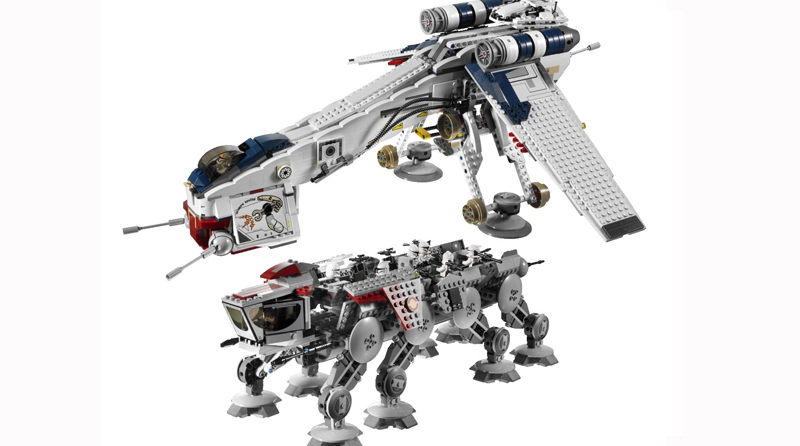 Two of the finest LEGO Star Wars sets ever released are up for auction, giving fans an opportunity to add these rare and retired sets to their collections.

Back in 2009, the LEGO Group released 10195 Republic Dropship with AT-OT. While The Clone Wars merchandise proved popular early on, it took a a little longer for the series itself to find an audience. 10195 had a relatively short shelf life and didn’t come cheap, so the set has steadily climbed in value on the secondary market.

This particular copy of the set is opened rather than brand new, but that’s the only way that most collectors will be able to justify the expense of this model. For the most part it is in great condition and ‘still shiny’. All eight of the original Clone Trooper minifigures are present and correct.

There is a brand-new LEGO Star Wars 10178 Motorized Walking AT-AT up for auction too. It’s the only LEGO AT-AT Walker to ever have a motor as part of the model, allowing it to stagger forward just as the mechanical beasts did in Star Wars: The Empire Strikes Back. While it is not visually quite as neat as some of the others, it’s the best by far, simply because of this wonderful function.

Being able to get this set brand new is not something that happens every day, especially with the box in nice condition. For whoever wins this auction, carefully adding it to the collection – whether to open or build or preserve in the box – will be a very special moment.