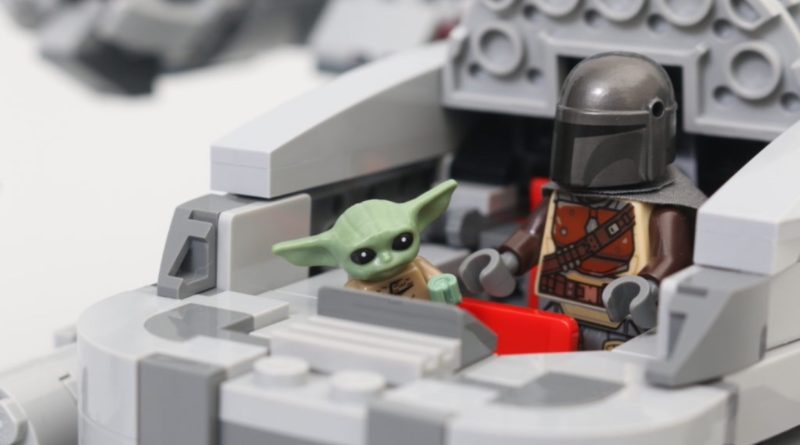 Rumours for LEGO Star Wars summer 2022 sets include details of a Phase 2 Commander Cody and a potential UCS Razorcrest.

Promobricks are reporting that 10 Star Wars models are launching later this summer and a new report from the source suggests that the theme will cover everything from The Bad Batch to The Mandalorian and even Kenobi, which was recently confirmed to be getting at least one LEGO set thanks to a merchandise marketing campaign.

We’ve summarised the details in this rumour for you below, but be sure to take everything from here with suitable caution, as you should with all unconfirmed reports.

Said to be based on The Bad Batch, Cad Bane’s Justifier ship is mentioned as including minifigures of Cad Bane, his droid Todo 360, Omega, Hunter and Fennec Shand. The ship is rumoured to be comparable in size to 75315 Imperial Light Cruiser and cost €159.99 for 1,022 pieces.

Before you get too excited, the source clarifies that while they believe a UCS Razor Crest is on the way, they are unsure and this report is instead based on another rumour from Republic Studs. Because of this, it should be taken with an especially large pinch of salt until confirmed otherwise. The initial rumour states that the possible UCS Mandalorian model could cost $529.99 for release in Autumn.

Another AT-St is rumoured for later this year, though as a 4+ set that is said to use the legs from 76830 Zyclops Chase. A price tag of €29.99 is mentioned for 87 pieces. A speeder bike and tree are also reported with minifigures of Wicket, a Scout Trooper and an AT-ST Driver.

The main build of this model is rumoured to be similar to the Jedi Starfighter in 75191 Jedi Starfighter with Hyperdrive, but with the extra inclusion of the first Kaminoan minifigure using a new head element on a minifigure body, Obi-Wan Kenobi with a hood and printed cloak and R4-P17. It is said that this set will cost €29.99 for 282 elements.

The first of two rumoured Obi-Wan Kenobi sets, of which at least one for the series is confirmed already, is described as a 30-stud wide scene on a lava-filled planet but is not part of the Diorama Collection. Minifigures are rumoured to include Imperial Officer Tala Durith, Obi-Wan Kenobi, Darth Vader and droid NED-B. For the reported price of €49.99, you’re said to be getting 408 elements.

We already have a new piece for the BD series of droids and the rumours of a Star Wars Jedi: Fallen Order set continue with 75335 BD-1 reported to feature a 31cm tall build of BD-1 from the game with moving legs and a head featuring a hidden compartment filled with three health stims. 1,062 pieces are rumoured for €99.99 with a figure of BD-1 and an informative plaque.

The second Kenobi set is reported to be based on the angular, black ship seen in the trailer for the series, The reported minifigures may be the highlight here with the Grand Inquisitor, Third Sister Reva, the Fifth Brother and a different Obi-Wan Kenobi minifigure from the smaller rumoured model for €99.99 over 924 elements.

The description for this rumoured set states that it will feature a Phase two Commander Cody minifigure with printed legs and feet and an orange visor. A new Phase two helmet with holes on the side is also reported as included on three 212th Troopers and a clone gunner. The AT-TE is said to be shorter with smaller feet than previous versions and is rumoured to be facing off against three battle droids and a spider droid for €139.99.

Not much context is known regarding this set, though a rumoured description is provided. You should take this as a potential spoiler warning for the Andor series in case any of this does turn out to be accurate.

For €69.99, a small spaceship is reported with a speeder bike on the side. Minifigures mentioned include one dressed in blue and a hat similar to a Bespin guard, a second dressed in a beige coat and receding blonde hair, and a final minifigure with a beard, a brown version of the Sirius Black hair piece. That last minifigure is believed to be Cassian.

Rounding out the rumoured list is a report for 75340 LEGO Star Wars Advent Calendar, which is mentioned as including R2-D2 and C-3PO in seasonal attire and Luke Skywalker minifigure in a Hoth outfit. Otherwise, potential contents are unknown.

Remember that the above information is currently unconfirmed by the LEGO Group and should be taken with caution until announced officially. For the reported Kenobi sets, it’s likely we don’t have long to wait and see if they’re accurate.