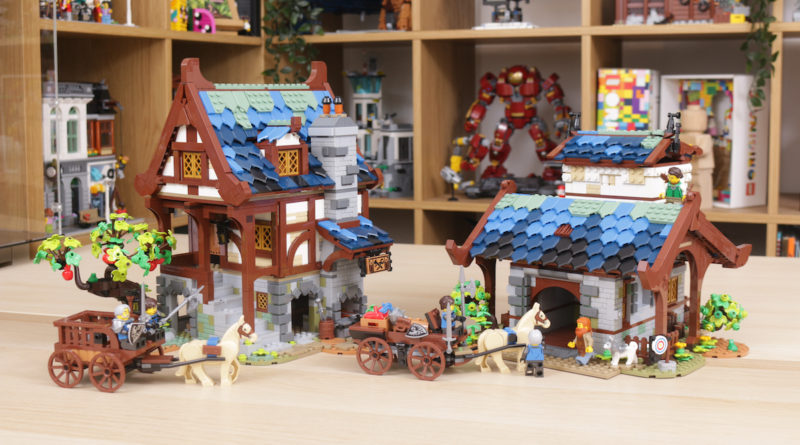 LEGO Ideas 21325 Medieval Blacksmith is primed for transforming into any number of completely different Castle-themed models – here’s just one example of what it can become.

21325 Medieval Blacksmith is undeniably one of the finest LEGO Ideas sets to date, capturing the nostalgic appeal of the old Castle theme and giving it a new twist in concept, subject matter and design. It’s a pleasure to build and a wonder to behold on display once complete. It’s also, as it turns out, a set full of potential to take apart and build something completely different out of.

That is courtesy of the rather unique platform Rebrickable. It’s still far from perfect, given it remains susceptible to people posting up the work of others and laying claim to it, but it is also a huge and exciting platform for those interested in discovering new models to build out of their LEGO sets.

The website hosts custom builds from users that are either entirely new or that serve as a modification or add-on to an existing official LEGO set, and offers parts lists for those builds as well as instructions.

Other users on the site also post rebuilds of official LEGO sets, using only the parts available from any given set to build a completely new model. This latter approach to custom LEGO model design is intriguing – within a limited selection of bricks, some users on the site are unlocking some fantastic creativity to put together some really interesting models.

Gr33tje13 is one such user, and it is their work around rebuilds that we are exploring in this feature. A glance at their uploads demonstrates a notable penchant for rearranging bricks and particularly those of 21325 Medieval Blacksmith, with a quite amazing seven different models built from the Ideas set alone.

Torn between the Windmill and Barn, we have elected to put together the latter as it offers a building that sits in greater contrast to the original Blacksmith. Where the official Ideas set is a tall, three-story building, the Barn is a short, wide, two-story construction.

Some users on Rebrickable will upload instructions for free while others ask for a fee in recognition of the time and expertise that has gone into their creations. A charge of €5 for the instructions for the Barn is more than reasonable, with particular consideration to the quality of the model and the fact that there are 209 steps of the build across a 176-page PDF document.

After paying for and downloading the instructions, the first stage of the build is perhaps the most painful, as you have to open all the bags of parts for 21325 Medieval Blacksmith at once (or one after another if you have some sense) and part them out into some logical order.

In this instance, we chose to sort the parts into a few sections – almost all the brown pieces; the SNOT (Stud Not On Top) parts; all the plates; all the bricks; all the slopes and inverted slopes; and, finally, all the miscellaneous pieces. It’s a time-consuming task, but one that saves the effort of having to rummage through a pile of unsorted parts that at the start counts in at 2,164…

As a build process, Gr33tje13’s model is of course very similar to building any LEGO set. However, there are notable differences as the usual rules around build level, playability and structural integrity that the LEGO Group has to follow with official set designs don’t need to be followed here.

That translates into a mix of occasionally loose or even unconnected bricks in places, and some intriguing and somewhat tricky build techniques throughout. It’s by no means a criticism – if you venture into the world of LEGO fan building, it’s full of ideas and ingenuity, and this rebuild is a great example of that.

While aspects to the model are a bit more time-consuming to assemble (with particular acknowledgement to the roof), the final effects demonstrate a masterful understanding of the LEGO medium and a really quite remarkable final model with detail and story built into it, 360 degrees around.

It’s remarkable in particular for how at once this model has been built using only parts from one copy of 21325 Medieval Blacksmith (with quite a few spares left over actually) and that aesthetically it fits into the same universe in style, tone and setting so effortlessly, while still being a completely different build to the official set.

Almost everything that is great and enjoyable about 21325 Medieval Blacksmith is present again in Gr33tje13’s Barn rebuild, and together they make for the start of a medieval village full of character and charm. Rebuilds are a new way to experience an old set, or another way to build with a second copy of a favourite set. Be warned, once you’ve put together the Barn, you’ll be eyeing all sorts of other rebuilds…

The LEGO Group provided this copy of 21325 Medieval Blacksmith for the purposes of this feature.

Support the work that Brick Fanatics does by purchasing your second, third and fourth copies of LEGO Ideas 21325 Medieval Blacksmith through one of our affiliate links.