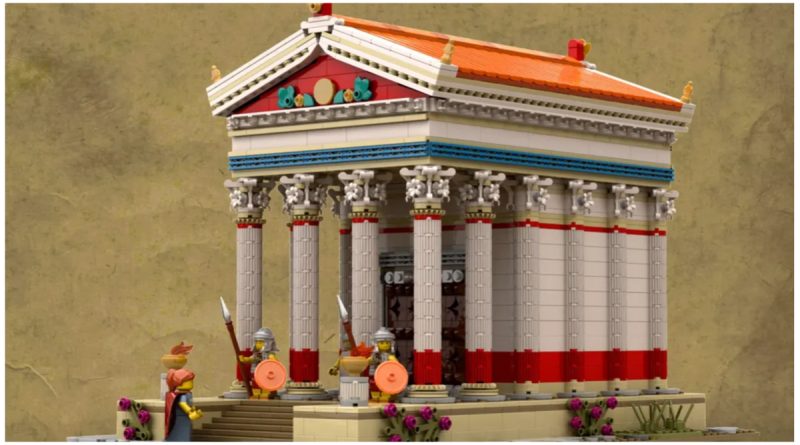 The latest design to qualify for LEGO Ideas is also one of the oldest as Ancient Roman Temple gains 10,000 votes.

As the flag falls on one LEGO Ideas qualifying period, another opens. 51 designs have made it through to the second review of 2022, including Ancient Greek Temple by designer HP_Brixxter. But they haven’t been sitting idly by, waiting for the result. they’ve been designing again, this time creating an Ancient Roman Temple, and it’s the first to achieve 10,000 votes in the third review of the year.

HP_Brixxter is clearly a history buff, and has created an accurate model of a typical Roman Temple, siting the building on a pedestal with a triangular pediment supported by a colonnade of columns and demi-columns. Please excuse us while we nip off to Wikipedia.

The set has been designed to be modular, so that the roof may be removed, granting access to the detailed interior. The model also has opening doors. The colours are historically accurate too. As the designer says: “Ancient buildings are usually portrayed white in contemporary art; only the white marble remained as the organic paints used two millennia ago decayed over time. Nevertheless, these buildings were indeed lavishly painted, usually in crimson red with colourful reliefs on the pediments.”

The set is made from around 2,700 elements and includes four minifigures including a senator, a patrician woman and two temple guards. This set is the first to qualify for the third review of 2022. The window will close in early January 2023 at which point the LEGO Group will decide whether it will be put into production.