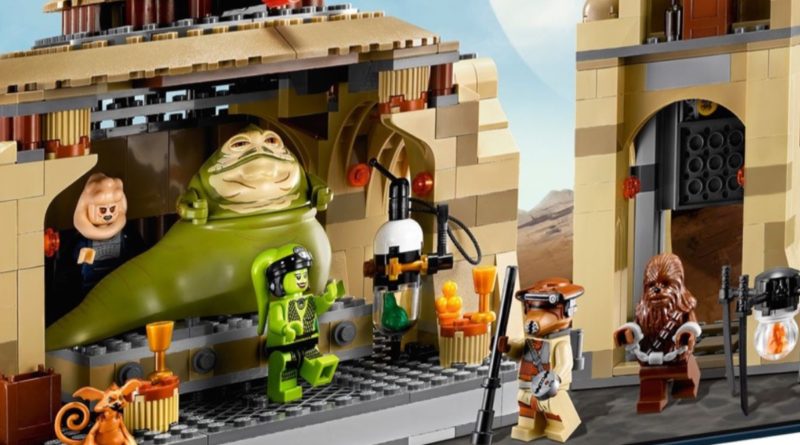 Hutts tend to take up a lot of space, so if LEGO Star Wars gets some new dioramas, what might a rumoured Jabba’s Palace look like?

If the rumours are to be believed, then 2023 will see a new addition – potentially three additions – to the LEGO Star Wars diorama collection. Thus far we’ve had two from A New Hope with 75329 Death Star Trench Run Diorama and 75339 Death Star Trash Compactor Diorama, while the third, 75330 Dagobah Jedi Training Diorama, was taken from the scene in The Empire Strikes Back.

The grapevine suggests that next year’s sets will all be based around The Return Of The Jedi, which makes sense, given that next year sees the 40th anniversary of the film which rounded out the original trilogy. According to recent suggestions, the set tagged 75352 could be a Jabba’s Palace Diorama which could make for an interesting set.

Two of the first three dioramas were at minifigure scale, with Luke training hard in the swamp under Yoda’s instruction in Dagobah, while in the Trash Compactor scene, Luke, Leia, Han and Chewie all try to avoid becoming a whole lot thinner. The other build is at microscale, as Luke (him again! That’s just greedy), is pursued down a heavily greebled trench by Lord Vader and his minions.

From what we’ve heard, a Palace scene will be at minifigure scale, with up to six characters included. This has to include Jabba, obviously and the rumours suggest Bib Fortuna and Leia-in-disguise Boushh will be included too. Add in at least one Gamorrean guard and a couple more to make up the numbers – Salacious B. Crumb perhaps? Maybe Boba Fett or C-3PO, and the throne room is starting to get a little crowded!

The thing is, Jabba himself is fairly large. In the previous incarnation of his throne room, 9516 Jabba’s Palace back in 2012, he took up around a third of the available space, meaning the throne room itself was a fairly basic affair. We’ve seen from the previous dioramas that the designers like to put in a significant amount of detail, which suggests either a scaled-down Jabba or a scaled-up throne room. With a rumoured price of €99.99, which is €10 more than two of the current sets and €30 more than the Trench Run, we’re thinking ‘Bigger palace’.

Of course, 9516 Jabba’s Palace had a functioning trapdoor, and the following year the set was followed up by 75005 Rancor Pit which was designed to fit below the palace floor. Could we see a future diorama work along similar lines? If we’re honest, we think that’s pretty unlikely, given that these sets are designed as display pieces rather than play sets. But whatever it turns out to be, we’re curious to see just how much detail – and how many characters – the designer can cram in. We’re going to have to wait until May of next year to find out though.

If you’re now hankering after some Star Wars LEGO, or any other sort for that matter, you can support Brick Fanatics by purchasing it via our affiliate links. Thanks.