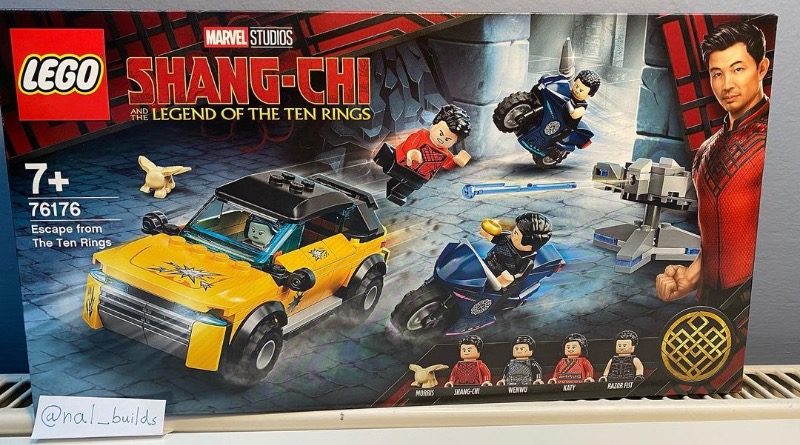 Another brand new LEGO Marvel Shang-Chi and the Legend of the Ten Rings set has turned up at a toy store in Slovenia.

The LEGO Group still hasn’t officially announced either of its tie-in sets for the upcoming Marvel Cinematic Universe movie, which is slated to premiere on September 3. But the cat is now firmly out of the bag, as both models have been sold way ahead of their intended street date by independent retailers.

Redditor lord_polo121 originally found 76177 Battle at the Ancient Village at an Israeli retailer back in March. Now, Instagram user nal_builds has managed to pick up both that set and the previously-unrevealed 76176 Escape from the Ten Rings from a toy store in Slovenia.

Packing in a flame yellow car, two dark blue motorbikes and a pair of turrets, 76176 Escape from the Ten Rings is the smaller of the two Shang-Chi and the Legend of the Ten Rings sets, but still looks to offer a decent spread of builds and minifigures for what nal_builds reports was a retail price of €30.

In fact, it actually matches the larger 76177 Battle at the Ancient Village in character count, with four standard minifigures and a single-piece Morris figure in the box. That new mould, Shang-Chi and Wenwu (or The Mandarin to you and me) are repeated across both sets, however, with only Katy and Razor Fist exclusive to 76176 Escape from the Ten Rings.

We’ll let you know when the LEGO Group officially unveils both sets, so stay tuned to Brick Fanatics to find out when you’ll be able to get your hands on them, and how much they’ll cost in other territories.