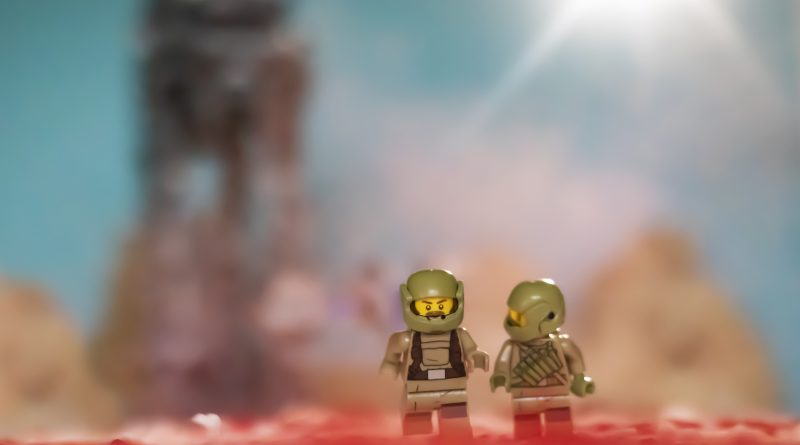 As a lifelong Star Wars and LEGO fan, to be asked to provide the photos for a Brick Fanatics Magazine LEGO Star Wars special feature was quite a mind-blowing opportunity. What made it so special was that the feature, which can be found in Issue 12, is an interview with LEGO Creative Director Jens Kronvold Frederiksen, Design Manager Michael Lee Stockwell alongside Lucasfilm Concept Artist Jake Lunt Davies (the man responsible for BB-8, Rey’s Speeder, the Porgs… and many more iconic designs).

Recreating such a diverse range of locations featured in the three sequel trilogy films was certainly a challenge but with the right props and some advanced photography techniques I managed to bring the LEGO Star Wars universe to life.

The planet Crait plays a key role in the final scenes in Star Wars: The Last Jedi. While the film itself is divisive to say the least, one thing that’s undeniable is the visually rich locale of Crait. The battle between the giant First Order Walkers and the rickety Resistance Speeders set against the contrasting stark, barren white salt plains and vibrant red dust made for some of the movie’s most visually striking cinematography. Capturing the dramatic look of this epic conflict was the first subject I set about shooting.

The minifigure scale Ski Skimmer is a brilliant set but for the purpose of this shot it was simply too large when compared against 75189 First Order Heavy Assault Walker.  To make the scaling of the scene work I opted to use the Microfighters version instead, which actually turned out to be the perfect size. To create the look of the skimmer flying through the air, modelling wire was attached to the underside of the model, which was then later painted out in Photoshop.

To recreate the cracked landscape of Crait I turned to a very simple prop – polystyrene sheets. They are already the perfect colour for the salt plains and can be scored and cut into very easily to recreate the cracked appearance of the ground. Rocks were placed in the background to represent the distant mountains and a blue card was used for the sky. A small desk lamp was then shone into the camera to create the look of the sun beating down on the planet.

For the red soil underneath I used a combination of red aquarium rocks, which helped to give a solid and more robust look, and powdered paint. The paint in powder form could be spread around the scene exactly where I needed to place it. By droppiong it from a slight height, the paint would spread out, which was perfect for creating the impact caused by the AT-M6’s footprints.

Finally the powdered paint can be used to create dynamic effects, bringing action and movement to the photograph. By using a small air blower the paint can be made to look like dust being kicked up into the air, recreating the billowing dust trails the Ski Skimmers created all over the surface of the planet.

In order to capture the dust mid air I shot on a very high shutter speed, which effectively freezes any motion, even fast moving objects like specks of powdered paint.

Using the same setup and techniques, I also shot a pair of Resistance Troopers running for their lives from the enemy and an ominous low angle of the First Order Heavy Assault Walker.