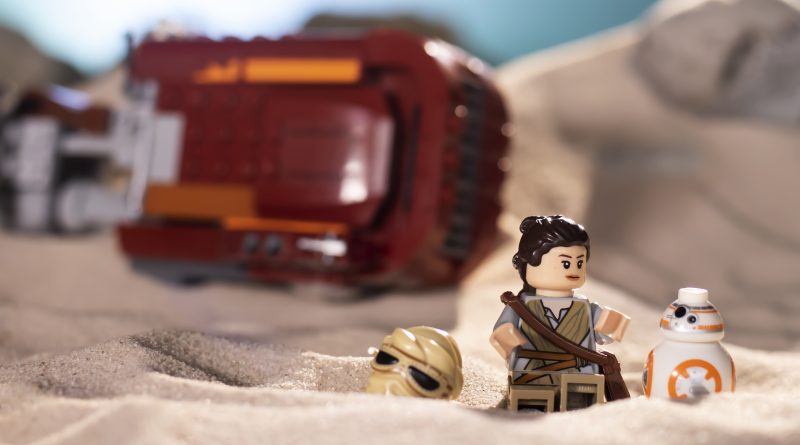 The first Star Wars sequel trilogy location that fans were introduced to was Jakku. Dimitri Nicomanis reveals how he recreated the location in a series of beautiful LEGO photographs

Shooting a photographic series that looks back at the last four years of LEGO Star Wars was an absolute pleasure – but with each location featured in the sequel trilogy being diverse, distinct and uniquely recognisable I knew it would be a challenge to capture the look and feel of each one.

Jakku is the very first planet seen in Star Wars: The Force Awakens, which also makes it the first location seen in any of the sequel films. It is arguably as important to the new series of films as Tatooine was to the original trilogy. The planet is a stark, barren place with a bright sun, covered predominantly in sand.

I tend to find the best material to use when wanting to create a sandy landscape is… sand! Not just any sand though, I use sand designed for lizard terrariums as it is very fine, very clean and easy to handle. I used rocks as a bed to pour the sand over as this creates the look of large sand dunes really well. I then placed larger rocks in the background to create the look of distant mountains, which helped to add depth to the shot.

Some of the scenes in Jakku are filmed at sunset, so to give myself the option of either using a blue sky (for day) or an orange sky (for sunset), I simply swapped out large blue card for large orange card.

To light the scene I shone a desk lamp into the camera to create the look of a blazing hot sun, but for some shots, in particular the sunset shots, I placed a smaller light behind the scene shining up onto the card. This creates the look of a setting sun in the distance and also helps to give the card a natural looking gradient, as opposed to just being a solid block of colour.

From the moment I saw Rey’s Speeder in the trailer for Episode VII, I fell in love with the design. It was the first LEGO Star Wars set from the sequel trilogy I bought and still has a special place on my shelf. Of all the sets I shot in this series, this was the one I particularly wanted to get right.

I wanted to capture the feel of Rey’s Speeder flying across the desert plains and so placed the model onto trans-clear bricks, lifting it off the surface. These were later be painted out in Photoshop.

I also used an air blower to kick the sand up behind the speeder, creating a sense of movement.

To further add a sense of movement to some of the shots, I added a motion blur effect to the background. This really helped to bring the pictures to life, creating speed within the frame.

Shooting this series was an absolute pleasure, not only because of my love for the source material and LEGO creativity, but also knowing that my photography was to accompany an interview with some of the people who have helped shape the new trilogy both for the screen and for the brick. It is something I will always be truly proud of.