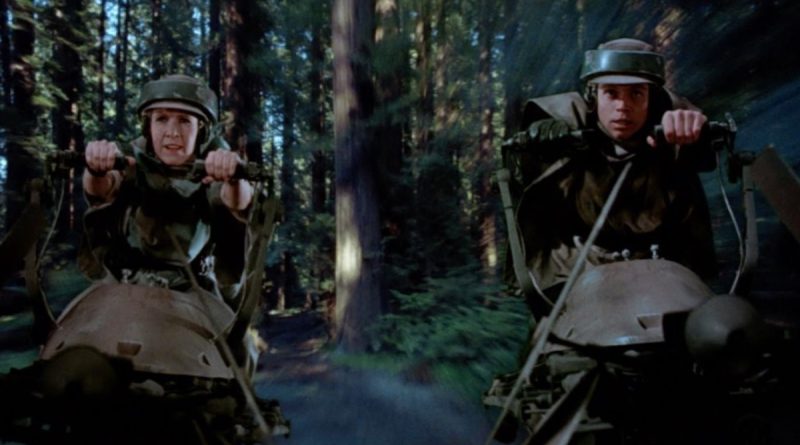 Next year’s LEGO Star Wars line-up is rumoured to include a Return of the Jedi speeder bike chase, and with a little imagination, it could just be the best diorama set to date.

Beyond this summer’s 75332 AT-ST, the forest moon of Endor hasn’t had a lot of love from the LEGO Group over the past few years. That could be about to change, as 75353 Endor Speeder Bike Chase Diorama is rumoured to be joining the LEGO Star Wars Diorama Collection, which kicked off this year with 75329 Death Star Trench Run Diorama, 75330 Dagobah Jedi Training Diorama and 75339 Death Star Trash Compactor Diorama.

The latest reports say the set will retail for €79.99, with minifigures of Luke Skywalker, Princess Leia, a Scout Trooper and either an Ewok or a second Scout Trooper in the box. Those are all the basic ingredients for any good Return of the Jedi speeder bike set, but there are plenty of ways 75353 Endor Speeder Bike Chase Diorama could go above and beyond the expected.

One way to instantly elevate 75353 Endor Speeder Bike Chase Diorama above its predecessors, from 7128 Speeder Bikes through to 8038 The Battle of Endor and even 10236 Ewok Village, is through its minifigures. Just as 75339 Death Star Trash Compactor Diorama brought us the definitive R2-D2 with back printing, so too could the rumoured Endor set deliver the best versions yet of Luke and Leia, complete with helmets and ponchos.

If the LEGO Group is sticking with the same size base for all its dioramas going forward, there won’t be a huge amount of space for speeder bikes in 75353 Endor Speeder Bike Chase Diorama. We’re hoping that doesn’t mean we’ll only get two bikes, though: instead, it would be neat to get three or four smaller and more accurately-sized speeder bikes.

Given this would be a set designed for display before play, the LEGO Star Wars team might even be able to get away with sacrificing stability for accuracy, with bikes that need to remain locked in position on their base.

What’s an Endor set without trees? Erm, well, technically one of the best Return of the Jedi sets of all time in 8038 The Battle of Endor. But a speeder bike chase needs tall tree trunks to weave through, and when we say tall, we mean tall. We’ll accept nothing less than towering trunks for 75353 Endor Speeder Bike Chase Diorama, even if it means they can’t be topped with branches and leaves.

Organic designs that better reflect the comparatively skinny Sequoioideae trees at Redwood National Park – the real-world filming location for Endor – would also help to distinguish 75353 Endor Speeder Bike Chase Diorama from its contemporaries, leaning into the adult focus afforded by the 18+ label.

The current Scout Trooper minifigure is much improved from the LEGO Group’s earliest designs, particularly in its helmet, but there’s still room to upgrade it even further. The easiest way to do that is with dual-moulded arms, the elements for which already exist in the LEGO part library. Additional printing on those would serve the character even better, while dual-moulded legs would finish it off perfectly. You know what to do, LEGO Group.

If we’re talking pipe dreams, we’d love to see 75353 Endor Speeder Bike Chase Diorama expand the remit of the LEGO Star Wars Diorama Collection to incorporate motion. We’re thinking something along the lines of Jason Allemann’s Pursuit of Flight, which simulates side-to-side movement for its biplanes. It would mean significantly expanding the height of the diorama’s base, though, so we can’t really see it happening at €79.99. But you never know…

If we can’t have actual motion in 75353 Endor Speeder Bike Chase Diorama, there at least needs to be some way of communicating a sense of speed: after all, this is one of the most visually arresting sequences in the entire saga, as our heroes hurtle through dense redwood trees at breakneck speed. One way to do so could be through a rotating backdrop of tiles, much like 71374 Nintendo Entertainment System’s scrolling television screen, all printed with a blurred vision of Endor’s forest.

That’s just one example, but there are surely plenty of other ways to make it happen. And above all else, communicating the sense of motion that’s integral to this scene feels like a must for 75353 Endor Speeder Bike Chase Diorama.

This is all contingent on 75353 Endor Speeder Bike Chase Diorama actually existing, of course: for now, it’s just a rumour, and could yet not pan out as expected. We’ll have to wait for confirmation of the LEGO Star Wars 2023 line-up to find out for sure.