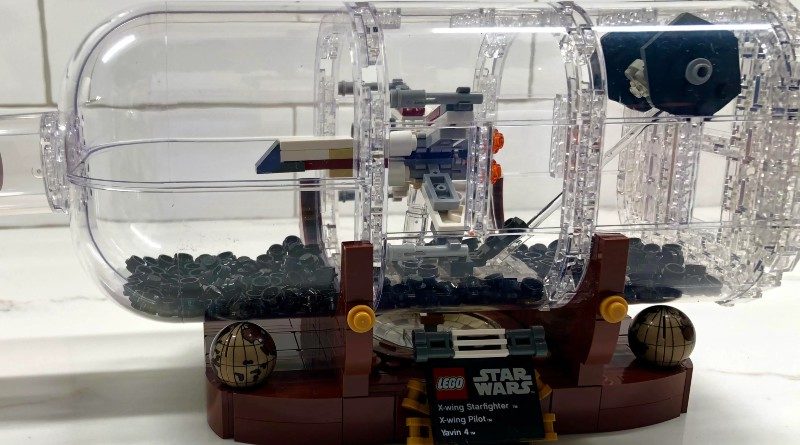 LEGO Ideas 92177 Ship in a Bottle suits the taste of any sea-loving LEGO fan, but for those that enjoy a galaxy far, far away, one builder has remixed the set with Star Wars.

As markrhat notes in the title of his post on the LEGO subreddit, this is technically still a ship in a bottle, but at this point, it’s more like a spaceship in a bottle – or should that be spaceships?

This build uses the main model of 92177 Ship in a Bottle but replaces the interior with a pair of Star Wars spacecraft and some black studs to represent space itself.

The scene inside appears to be inspired by the Death Star Trench when Luke Skywalker attempted to avoid the fire of pursuing TIE Fighters on a mission to destroy the superweapon.

A small X-wing model is followed by an even smaller TIE Fighter whilst floating atop a sea of black studs, thanks to some transparent stands. Even the plaque on the base of the model has been replaced with one themed to Star Wars.

This build has us wondering what other miniature scenes would fit well inside 92177 Ship in a Bottle, with the LEGO Star Wars magazine frequently producing many microscale spaceships.