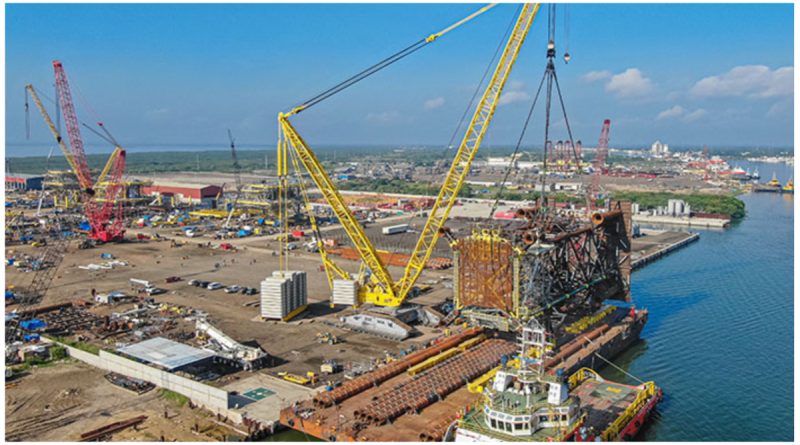 If the rumours are true, then the next LEGO Technic flagship set will be the Liebherr LR 13000, but do the numbers stack up?

Some of these machines pushed the limit of what’s possible with the Technic system. Longer, heavier spans mean that joints start to sag. More functions put strain on motors. While the large Liebherr had seven motors to carry out the various operations, the Bucket Wheel Excavator from 2016 notoriously only had one large motor to run everything. The power had to be transferred by ever longer lengths of axle and the build suffered as a result.

Technic fans will therefore be looking at the rumoured 2023 flagship set with a keen and critical eye to see what the LEGO Group have come up with. The price for 42146 Liebherr R 13000 is suggested to be €449.99 which is on a par with the previous Liebherr. However, rather than the 4000+ pieces of its predecessor, this set has, supposedly, fewer than 2,900.

It’s a different beast entirely. Where the R 9800 was an earth moving machine with all the substantial bodywork that that entails, the R 13000 is a crawler crane, an altogether more skeletal affair. That would account for the disparity in piece count, but with more than 1,200 pieces fewer, fans will be interested to know where the money is being spent. The last set we saw of a comparable size was 42043 Mercedes-Benz Arocs 3245 back in 2015. That had 2,793 parts but only cost $229.99. Okay, that was seven years ago, and prices have inevitably risen, but that’s still quite a disparity.

We’ll just have to wait and see if the new crane has any secrets up its sleeve. Maybe, like its sibling, it has a wealth of motors. Maybe it comes with a large collection of cargo to move about. It’s got a lot of rigging, from what we can tell – maybe the price of string has gone up recently. Whatever it turns out to be, we shouldn’t have long to wait, with a likely release date of January 2023.

Help support Brick Fanatics by purchasing your LEGO sets via our affiliate links. Thanks.

2 thoughts on “Could we be seeing something different from the next LEGO Technic flagship set?”