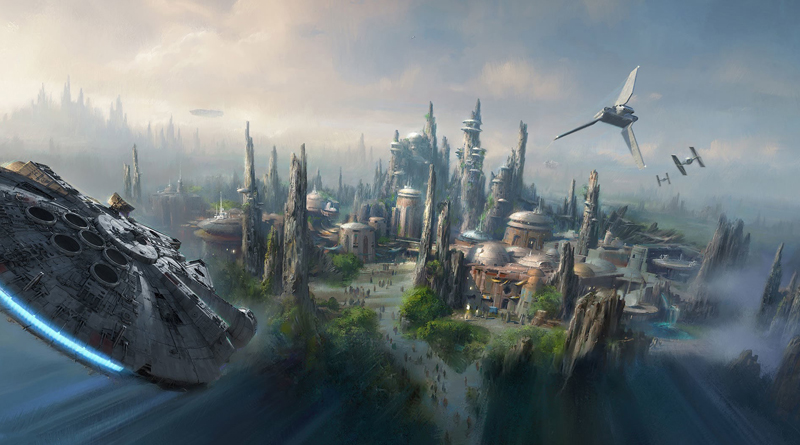 If ever there was a bonanza year for Star Wars fans, then it must be 2019. The sequel trilogy comes to its conclusion with Episode IX, The Mandalorian will be the first live-action Star Wars television series and Jedi: Fallen Order will bring story based games back as players take the role of a Padawan after Order 66.

In case that was not enough for devotees, Star Wars: Galaxy’s Edge is about to open at Disneyland, as well as Walt Disney World later this year. For the first time, fans of all ages will be able to experience a galaxy far, far away in person, living their own unique stories centred around a new location – Black Spire Outpost on Batuu.

Galaxy’s Edge promises to immerse fans in the Star Wars world, with Stormtroopers patrolling the park and alien characters running market stalls, whilst original music themes play in the background. Everything from buildings and food, to most of the exclusive merchandise, is inspired or directly replicated from what was introduced on screen. Just about everything that fans associate with Star Wars will be available to buy. Well, one thing missing… no unique LEGO Star Wars sets have been announced, despite the new land seeming perfect for the designers to take inspiration from. 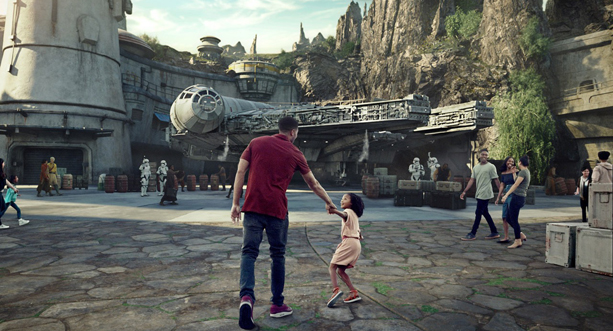 If the LEGO designers work under the premise of ‘go big or go home’, then a massive micro-scale set of Black Spire Outpost could be done in a similar way to 71043 Hogwarts Castle. Almost every round-shaped building could be recreated, with mini versions of the ships dotted around. The only problem would be if this set was a Disney theme exclusive – the box size and weight. Locals may be able to take home a huge LEGO set reasonably easily, but visitors from abroad have baggage restrictions to consider.

There are two major rides in Galaxy’s Edge – Millennium Falcon: Smugglers Run and Star Wars: Rise of the Resistance. To begin with, only the former is open, ready for queues longer than a Boxing Day sale. What fan doesn’t dream of flying the fastest hunk of junk in the galaxy? Maybe a hyper-detailed version of the Falcon’ cockpit could be a LEGO model, with working hyperspace levers and buttons, and even a few light bricks. The LEGO Group already made and an SDCC exclusive, 75512 Millennium Falcon Cockpit, so an upscaled version would make for a nice momento of the ride. 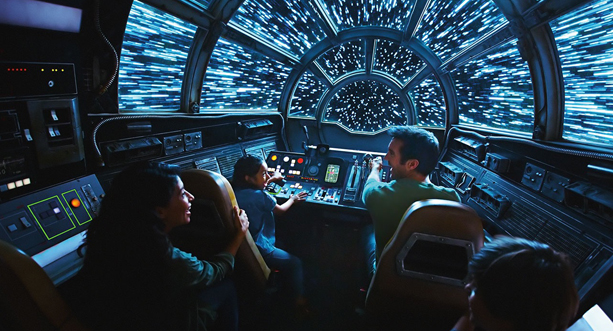 Whilst a LEGO set based on the entire park might be too big for most wallets and suitcases, small modular sets could be a solution to recreating the environment. Based on key locations and at minifigure scale, they could then be combined into a larger play filled model or make for a perfect display piece. A modular range would also be able to expand as Galaxy’s Edge will undoubtedly do in future.

The locations to recreate could be some of the shops, such as Savi’s Workshop, that is filled with all manner different LEGO lightsabers. Dok Ondar’s Den of Antiquities would be quite simple as some sets such as 75251 Darth Vader’s Castle have already come with similar Star Wars relics. Both sets would need exclusive minifigures of their respective proprietors, with Dok requiring a new Ithorian head-mould. Any of the restaurants or cafés, like Oga’s Cantina, could be filled with an assortment of exotic-looking food and drinks all made in bricks, with minifigures of the colourful denizens of Batuu also included. 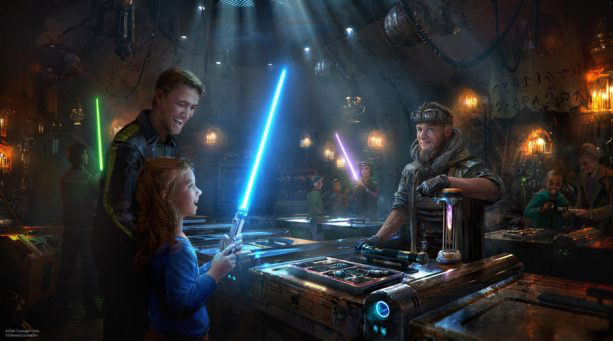 Like all planets in the Star Wars universe, Batuu has been designed to have a unique environment. It is characterised by its extremely high towers, which are meant to be giant petrified trees and where Black Spire Outpost gets its name. A LEGO set based on one of the spires would make perfect sense, with the odd angles and rough textures re-created using slopes and plenty of visible studs. The colour scheme may be a slight challenge but tan, dark orange, dark red and some nougat would all be good choices.

In a very meta touch, LEGO bricks do exist in some form in the Star Wars universe. Famously hidden within the Millennium Falcon is a 2×4 brick, whilst a “build-a-space-centre set” with “too many small pieces” is referenced in the Star Wars novel Last Shot. So the sets could be sold within Baatu without breaking the magic.

The LEGO Group have no excuse – let’s hope someone from the design team is reading this – not to create sets inspired by Galaxy’s Edge and need to hit the design hyperdrive if they want to tie into the launch year. While it would be best if they were available everywhere, exclusive to the Disney parks would be better than nothing. Let’s hope that the LEGO Group take advantage of these incredible new designs, and deliver some more theme park inspired sets.

What sets would you like to see inspired by Star Wars: Galaxy’s Edge?  Share your thoughts with Brick Fanatics on social media.

LEGO Star Wars 75244 Tantive IV was released today exclusively at shop.LEGO.com. May the Fourth promotions are available at shop.LEGO.com while stocks last, or until May 6.