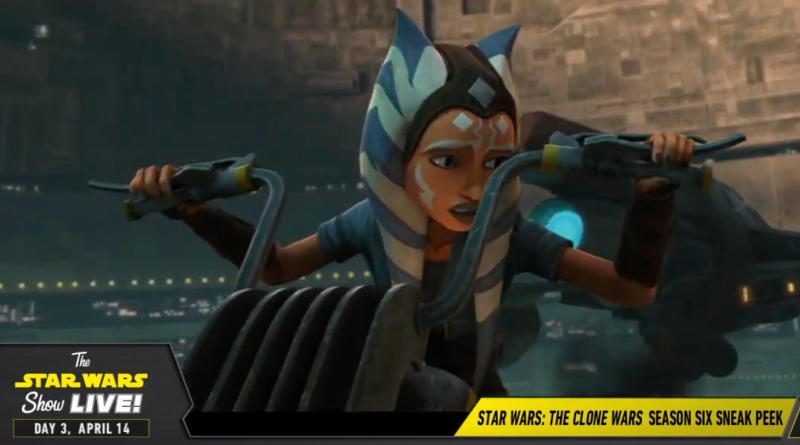 Just when you thought Star Wars Celebration had given us all it had to offer, the event’s last major panel has brought us footage from the new season of Star Wars: The Clone Wars, including the first trailer. Check it out below.

George Lucas’s animated series was originally canned by Disney after the Mouse House acquired the Star Wars empire in 2012. A handful of final episodes made their way to Netflix and, in some territories, Blu-ray, in a sixth and shorter series subtitled “The Lost Missions”.

That was all prequel fans had to enjoy for several years, though, with attention turning to the period between Revenge of the Sith and A New Hope with Star Wars Rebels. When that series wrapped up in 2018, it was succeeded by Star Wars Resistance, which is planted firmly between Return of the Jedi and The Force Awakens.

Then, Disney announced in mid-2018 that The Clone Wars would be returning (hashtag CloneWarsSaved) for a seventh season – although the Celebration panel has branded it as “season six” – consisting of 12 episodes. One arc has subsequently been revealed as Bad Batch, an unfinished run of four episodes that debuted online in April 2015. Based on a squad of experimental clones, the episodes will be completed for the new season.

It’s those episodes that part of the new footage has been taken from, as the squad – along with Captain Rex – faces off against a legion of advancing battle droids. In the years since The Clone Wars first arrived on screens, technology has come a long way, and that’s reflected in the footage. As Dave Filoni pointed out during the panel, the animation isn’t a huge departure from the original series, but the lighting in particular looks like a nice improvement.

The second clip revealed features Ahsoka on a speeder bike, racing through what looks like Coruscant. Naturally, things don’t go well for the young ex-Jedi, but fans will no doubt be overjoyed to see the character back in action. Finally, Filoni premiered a rough, unfinished clip of Ahsoka, reunited with Anakin, Captain Rex and the 501st, who’ve all given their helmets appropriately-themed makeovers. (You’ll also have seen this scene briefly in the trailer.)

While Warwick Davis referred to all the footage shown in the panel as “exclusive”, you can find it in the livestream of the entire thing over on the Star Wars YouTube channel, even if the individual clips don’t make their way there. Towards the end of the panel, Matt Lanter (Anakin Skywalker), James Arnold Taylor (Obi-Wan Kenobi), Catherine Taber (Padmé Amidala) and Tom Kane (narrator, Yoda) also joined the stage for a full, in-person Clone Wars reunion.

Finally, the team revealed the full three-minute trailer, which features everything from Ahsoka’s new, blue lightsabers to Darth Maul and the Siege of Mandalore.

The original five series of The Clone Wars brought us a huge number of LEGO Star Wars sets, so even Threepio would give you good odds of the new season doing the same. This footage wraps up a fantastic weekend of news for Star Wars fans, with plenty to tantalise LEGO fans.

In addition to the official reveal of 75244 Tantive IV, we’ve had the first teaser for Star Wars: The Rise of Skywalker, and the debut story trailer for Star Wars Jedi: Fallen Order. Plus, the introduction of The Mandalorian, though mainly only for those on the show floor (unless you’re savvy with your YouTube searches, of course).

Star Wars Celebration continues tomorrow, with the Phantom Menace 20th anniversary panel promising to be a real highlight. The Clone Wars footage just about does it for content we can expect to see LEGO sets from, though – let us know what you’re most excited for in 2019 in the comments, and on Facebook and Twitter.

The full sixth season of The Clone Wars will debut on Disney+ in 2020.