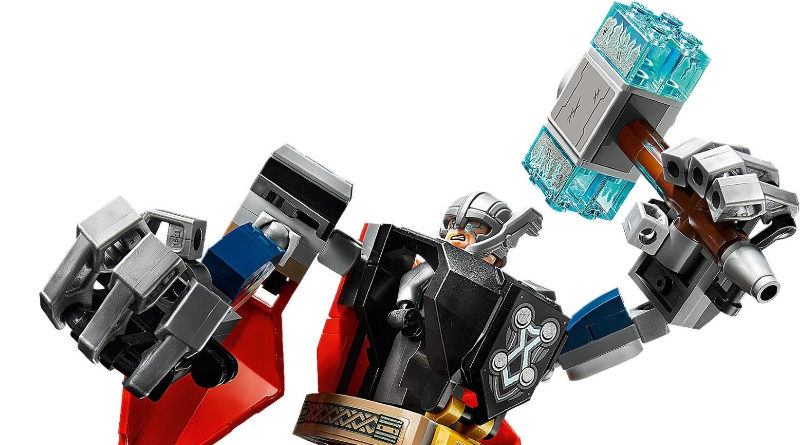 Call upon the power of Thor with a first look at the new LEGO Marvel 76169 Thor Mech Armor, thanks to an early review.

As part of the selection of 2021 Marvel sets, three new mech armor models will join the fray. Each mech includes a buildable suit of armor customised for the included minifigure hero. 76169 is themed to the god of thunder, complete with an oversized Mjolnir hammer.

Youtuber Ashnflash received an early copy of the set and has explored it in a review, noting that the Thor: Ragnarok helmet returns in a new colour.

The mech captures the likeness of Thor with an enlarged hammer and red cape, something which the included minifigure is not wearing, unlike most other LEGO appearances of Thor.

The minifigure is almost identical to the Thor included in 76142 Avengers Speeder Bike Attack and 76153 Avengers Helicarrier. However, part collectors may be interested in the returning helmet previously found in the Thor: Ragnarok sets. This time the helmet is silver, instead of titanium metallic in its last appearance.

LEGO Marvel fans can expect 76169 Thor Mech Armor to launch in January 2021 alongside five other Marvel sets. Two more Marvel sets have been revealed but don’t currently have a launch date.