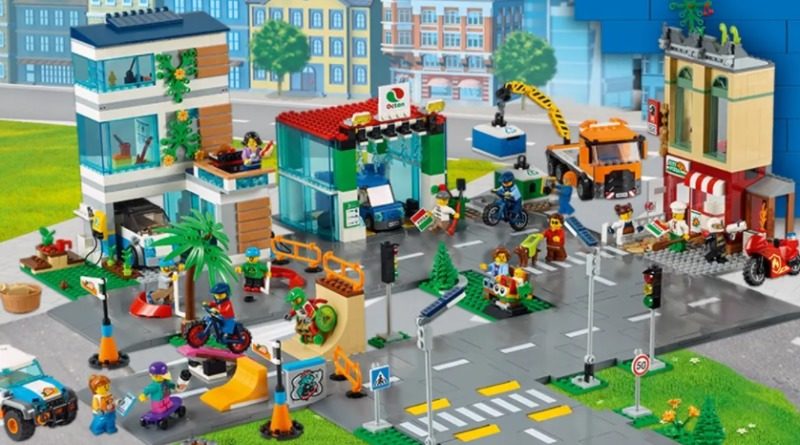 Smyths Toys’ latest advertising campaign reveals all of the action going on in LEGO CITY.

The new advert from the giant European toy retailer, exclusively features sets from the latest wave of LEGO CITY releases. Despite only being 31 seconds long the short clip manages to pack in plenty of product placement.

The advert begins with a skater launching themselves into the air from the ramps of 60290 Skate Park. From this vantage point they see that the pizzeria is ablaze. A montage of reaction shots from other citizens then plays, cleverly showing off several views of 60292 Town Centre and 60285 Sports Car. The fire brigade from 60281 Fire Rescue Helicopter are called to help as minifigures from numerous new sets descend on the pizzeria (as running towards a burning building is always smart).

Also shown prominently is the new LEGO road plate system, running between the various buildings. The replacement of printed baseplates in favour of these new brick-built roads has proved controversial for some fans. The LEGO CITY design team recently waded into the row to defend the switch, describing the new system as ‘more authentic’.

Smyth’s Toys have a long history of using LEGO CITY products to advertise their stores. A scroll through their Youtube channel will reveal many past campaigns that have similarly centred on the imagined action from that year’s LEGO releases.