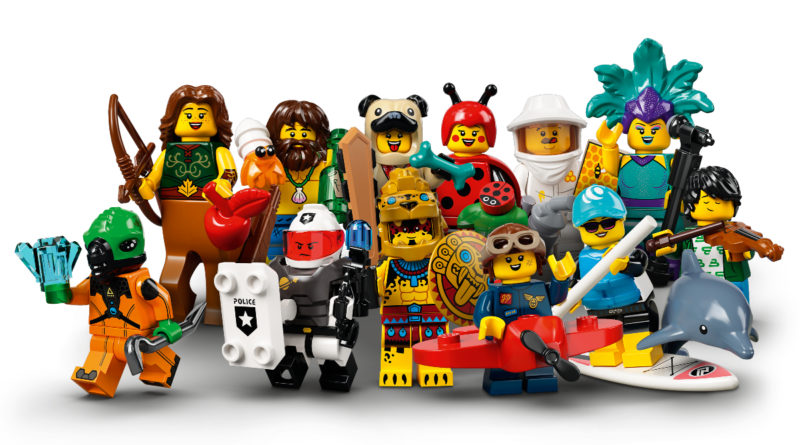 Halloween is here, and what better way to celebrate the spooky season than with a list of ten great costumed LEGO Collectible Minifigures.

The LEGO Collectible Minifigures have provided a variety of fun and creative minifigures over the past 11 years and 21 series, including a selection of characters in costumes.

Now that the spooky season has arrived for another year, we’re counting down ten great LEGO Collectible Minifigure Costumes perfect for a brick-built Halloween party.

Hot Dog Man from 71008 Series 13 may not be the most ambitious or scary costume on the list, but the smile on his face shows that this minifigure is proud of his food-inspired outfit and might just fill the role of the one guest at a party who is just happy to be in attendance with their friends.

The parts and costume budget for Cowboy Costume Guy must have been extensive as this minifigure featured three new pieces when it was introduced in 71021 Series 18. As one of the costume party Collectible Minifigures, this character references the iconic LEGO horse design with an ensemble that is sure to impress at any Halloween gathering.

An especially spooky outfit on this list comes in the form of the Cute Little Devil, with a seasonal design that sees a child dressed up in a costume resembling the infernal creature complete with wings, a tail, horns and even a pumpkin-shaped bucket to collect treats. A red hoodie can even be seen completing the look cost-effectively.

Another minifigure from 71021 Series 18 is next with Cactus Girl winning the prize for the most unique costume at any Halloween party. We’re not sure why this minifigure chose a cactus as her costume, but at least she won’t have to worry about anyone bumping into her.

You’re gonna need a bigger snack table when this minifigure arrives at the Halloween party with Shark Costume Guy portraying one of the most intimidating and iconic creatures in the ocean. With a fresh pair of fins instead of minifigure arms and a new head element, Shark Suit Guy is sure to make jaws drop during the spooky season.

What better way to celebrate a LEGO Halloween than to dress up as a brick? This minifigure is one of two in 71021 Series 18 to be representing the classic pieces of red and blue, with another appearing later in 71027 Series 20 (review) to commemorate 10 years of LEGO Collectible Minifigures with a green costume and a printed brick.

This Collectible Minifigure is reaching for the stars with this costume that not only features a retro rocket piece but also calls back to the days of classic space with a hand-drawn flag design. Rocket Boy first appeared in 71018 Series 18 and presents a great outfit for the younger guests at a Halloween party.

While this Collectible Minifigure could have been easily called ‘Spider Man’ – but likely wasn’t to avoid any links to the Marvel character – the especially spooky minifigure can be seen facing his fears of the arachnids by donning a unique costume inspired by them and even clutching one in his hand. We’re not sure how this minifigure would spend their time on Halloween other than doing whatever a spider can.

Next up to the brick-built Halloween celebration is 71010 Series 14’s Tiger Woman. As one of two costumed minifigures in a Collectible Minifigure range all about terrifying monsters, Tiger Woman includes a striped suit resembling the titular animal and a whip likely to reference another cat-based character from DC.

Rounding out the list is a classic choice for Halloween costumes as Skeleton Guy references the iconic minifigure with a detailed design and even a thematic Halloween bucket. Even as a simple outfit idea, the LEGO skeleton is a memorable piece of brick history that also makes for a spooky suit for Halloween.