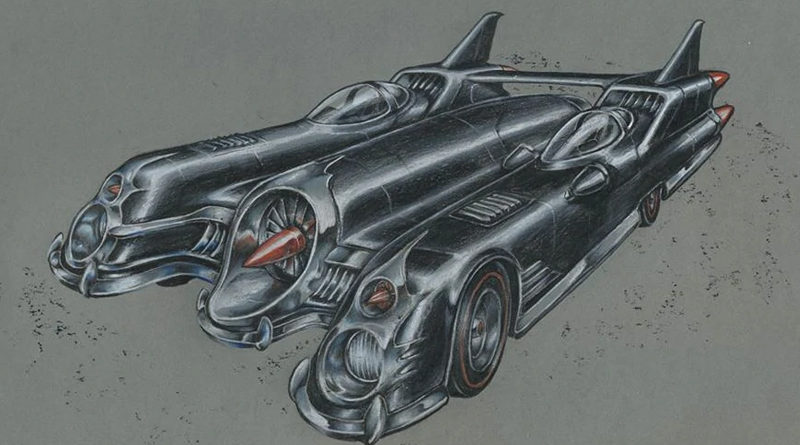 LEGO 76139 1989 Batmobile still looks as fresh as ever – despite the design being dreamt up for Tim Burton’s Batman by Julian Caldow three decades ago. In the final part of this exclusive Brick Fanatics interview, the talented artist discusses what it was like to work on the classic film

It took the LEGO Group until 2019, 30 years after the release of Tim Burton’s Batman, to deliver a worthy depiction of the film’s signature vehicle in 76139 1989 Batmobile. Concept artist Julian Caldow came up with the look of the Batmobile, the Batwing and many other Bat-gadgets for the film.

In the previous part of this exclusive interview, Julian explained how the Batmobile was built and discussed coming up with Bat-gadgets. In this final part, he reveals what it was like to be involved with the film that redefined what superhero movies could be.

Brick Fanatics: Did you seek inspiration from the comic books?

Julian: Batman hadn’t really been a comic that I’d looked at until I’d seen The Dark Knight Returns by Frank Miller. I’d seen that about a year before I got involved with the film, so that was my only real sort of comic link to it. And I thought it was great – it was kind of like Dirty Harry, quite violent, and I think they wanted to do that, and I think secretly there are filmmakers who still want to do that. Maybe Nolan came close, in that the Batmobile was like a massive tank. It was insane.

It was probably good that I hadn’t seen the comics. I did a movie, Thunderbirds, that never came to anything. They did make a version after the one I was involved in, but I was too close to it, because I was such a massive fan of Thunderbirds. When they started wanting to change this, that or the other, I got very angry in myself because I was like, ‘No, you can’t change it, it’s too lovely,’ which was probably how I would have felt going into Batman, had I had that emotional attachment to the material.

Did Batman feel like a big production at the time?

It was a relatively small art department by today’s standards. It was upstairs at ‘A’ block in Pinewood, so it can’t have been that many people – maybe 20. Anton [Furst, designer] had a very clear vision of what he wanted Gotham to look like and it seemed to be simpatico with Tim Burton, so there wasn’t much wrestling for ownership of the look.

I think everybody was thinking we were doing something a little bit different, but the producers were on board and it all got done pretty quickly. The backlot was huge and I had not seen a set like that before. When they had the finished Batmobile, someone said, ‘Go up to the stage, go have a look at it, it’s on the backlot.’ It was either winter or night shooting – I can’t remember, but I don’t think I was there for night shooting so I am going to assume winter. There was lots of steam everywhere so I assume it was cold.

I went up to the backlot of this massive set, with all of these extras in costume, and the whole place lit up to look like a Gotham street and a load of parked cars. There were Joker’s goon-mobiles and police cars, and then tucked behind it all was the Batmobile. Even though it was a very, very big car it was very low, so I didn’t see it initially. The way it had been painted a bit like a beetle’s skin looked great on the backlot because it had a purply iridescence going underneath, so as you moved around it you had that iridescence that you associated with insects and stuff. It was pretty special to see on the backlot.

You mentioned how close everyone was on the production. Did you get to spend time on set?

I do remember, just because it was early in my career, being very excited to be on set and see particular sets and how they had been lit. That was encouraged by Anton – I think he wanted me to come and see how the Batwing was getting on, how the Batmobile looked, and I was nervous of leaving my desk and how slow my drawing was. But he definitely encouraged you to go and see it. I tend not to go on the set now unless it’s something I’ve specifically been involved in because it’s always dark, [and] I’m always terrified my phone is going to go off.

Are there any particular moments that stick in your mind now from being on set?

Probably seeing the Batmobile on the backlot. I do remember at one stage Tim Burton having a cold, or flu I think it was, and he was still working, and there was this writers’ strike and Jack Nicholson was at the bottom of the stairs leading all the way up to the top of the church. And because there was this writers’ strike, Jack Nicholson turned around to Tim and said, ‘So what happens when I get to the top of this staircase?’ and Tim Burton turned around and said ‘I don’t know,’ which must have looked incredibly unprofessional.

I do remember being on the Jack Palance’s office set, that was a really beautiful set that had this amazing mural in it, but I didn’t really like to be in there when they were shooting. I always feel very self-conscious, – ‘Who are you and what are you doing here?’

What about the design makes it so beloved and memorable?

It’s hard to look at it in retrospect, but it isn’t really a car and I think that when it came out people expected to see my initial take on it, which was like a car. If you think of a famous prop in a film you can probably think of things from a Bond film like the Moon Buggy from Diamonds are Forever or Little Nellie from You Only Live Twice, but there are very few films where you talk about the prop in a movie. And that was one of the ones that was very successful.

I also like the way that it’s introduced in the movie. I think that’s a bit funny – Michael Keaton comes out of the gallery and says to Vicki Vale, ‘Get in the car,’ and she says, ‘Which one?’ Then you cut to this wide beauty shot and that’s the first time you see it, there’s a big music stab from Danny Elfman, and I think that’s a great introduction to another character in the film really.

Batman is a bit of a time capsule isn’t it? Except it doesn’t look like anything from the time. The style is very much of its time but the look is something that still works. You see it in lots of films that have taken their design cues from it, so I think that is why it has that longevity.

How does that experience stack up in your career?

I have very fond memories of working on that film. I don’t think I have ever had as good a time working on a movie that was so anticipated and so well received. It was exciting to be a part of because I remember the anticipation being so great at the time.

When the film was going to come out I remember being in the producer’s office and he said, ‘Look, we’ve got a trailer,’ and of course then it was a VHS, and I remember seeing the trailer and being blown away. And of course in America everyone went mad for it. But yes, I was excited for a number of reasons, and one of them was because during the making of the film I discovered that my wife was going to have twins. So when the film came out I was really anxious that they should see the film, even though it would be a few years before they could. The first film that my sons ever saw at the cinema was Batman Forever, which is probably no accident.

I went on the set with Anton and I told him, ‘Don’t tell everyone about my wife being pregnant, because it’s only a couple of months,’ or something like that. And of course he went on the set and said ‘Julian’s having twins,’ and that was the Gotham miniature set, which was huge, so that was kind of my moment of that. I have remembered more about it today than I have in a long time.