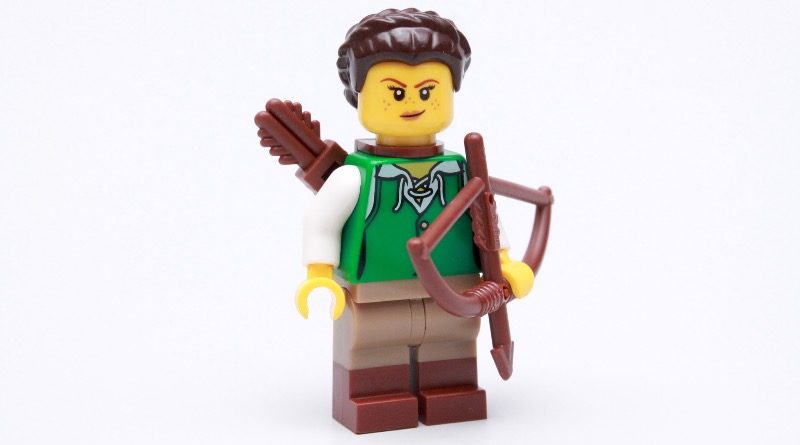 In case you were wondering, yes, the archer in LEGO Ideas 21325 Medieval Blacksmith is a direct reference to a much-loved Classic Castle theme.

LEGO Ideas Design Manager Sam Johnson and Senior Graphic Designer Austin Carlson revealed during a recent roundtable interview with select LEGO Fan Media (including Brick Fanatics) that the minifigure is an intentional throwback to the glory days of LEGO Castle.

“That was one of the number one things that Wes [Talbott, lead designer] and I and Sam were talking about – if we’re going to have an archer, it’s definitely going to be because we want the Forestmen tied in,” Austin explained.

According to Austin, the character – who’s readily-equipped with a bow and quiver – is supposed to represent the blacksmith’s wife. But the colour on her torso also deliberately mimics the ‘90s Forestmen theme, representing just one more way 21325 Medieval Blacksmith pays tribute to the long-dormant LEGO Castle range.

“We definitely wanted to make sure that she was going to have green represented on her with what we had available and what we could actually do,” Austin said. That meant turning to an existing torso, rather than designing an entirely new one – and if you’ve been paying attention to the LEGO Ideas theme over the past year, you might just recognise it.

“We made this awesome torso for 21322 Pirates of Barracuda Bay, and we really didn’t want it to be only in that one pretty expensive set,” Sam elaborated. “It works pretty well for recreating that [Forestmen] style, so I’m happy.”

Of course, 21325 Medieval Blacksmith is still a pretty expensive set, ringing in at £134.99 (compared to 21322 Pirates of Barracuda Bay’s £179.99 price tag). But if you’d rather just grab it on the aftermarket, Robin Loot’s torso is already pretty cheap on BrickLink, averaging a fee of around £1.60 new.

The archer minifigure isn’t the only way 21325 Medieval Blacksmith tips its hat to LEGO Castle, as the design team has also resurrected the Black Falcons faction for its two knights. You can find out why they chose that specific faction by clicking here.

For more on the design process behind the latest LEGO Ideas set, head through the links below: