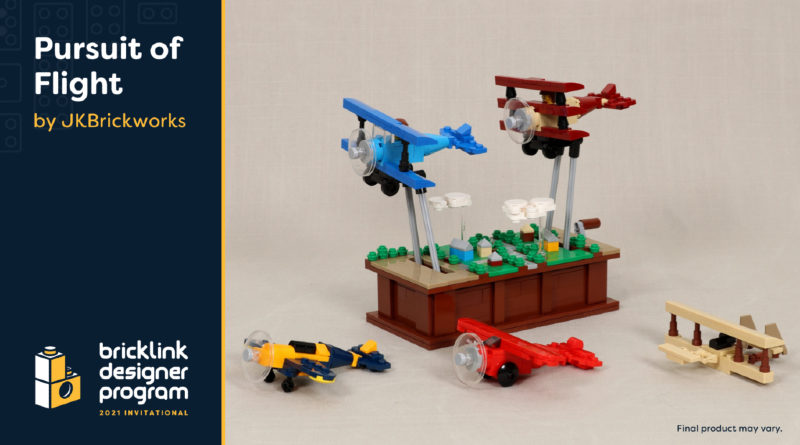 As the BrickLink Designer Program is about to kick off, Brick Fanatics is getting up close and personal with each project in the first crowdfunding round as one model might be taking off.

Eight projects have managed to migrate from LEGO Ideas after being rejected in the review to BrickLink and stand a second chance at becoming official LEGO sets, and this time more than one will be chosen with the decision left entirely up to you. Two of these submissions belong to Jason Allemann, also known as one half of JK Brickworks. We’ve already taken a thorough look at his other build so it’s time to turn our attention to Pursuit of Flight.

It wouldn’t be a JK Brickworks creation without some kind of kinetic movement and that’s nothing short of the main feature for this model. As the name suggests, this potential set focuses on two planes dynamically chasing each other through the sky, whilst a microscale world lives on far beneath them.

An accompanying fan designer video has been released to showcase the features and design for this new version of the model, which includes adding disproportionate minifigure heads to the aircraft to add some character to the flight. Additional builds are also featured to represent different eras of discovery when it came to perfect flight, living up to its name.

At 540 pieces, Pursuit of Flight should be on the lower end when it comes to cost in the first round of the BrickLink Designer Program and you’ll be able to get your order in quite soon as the initial phase is not long away from starting. You can find more images on the project page if the designer video wasn’t quite enough for you.

Round one of the BrickLink Designer Program will start on July 1 and builders look to be spoilt for choice when it comes to potential future sets – whether you wish to remember the legend of BIONICLE or learn about an endangered species of parrot. However, only the five that reach 3,000 pre-orders first will become official sets, so stay tuned as we keep you up to date when crowdfunding is open.