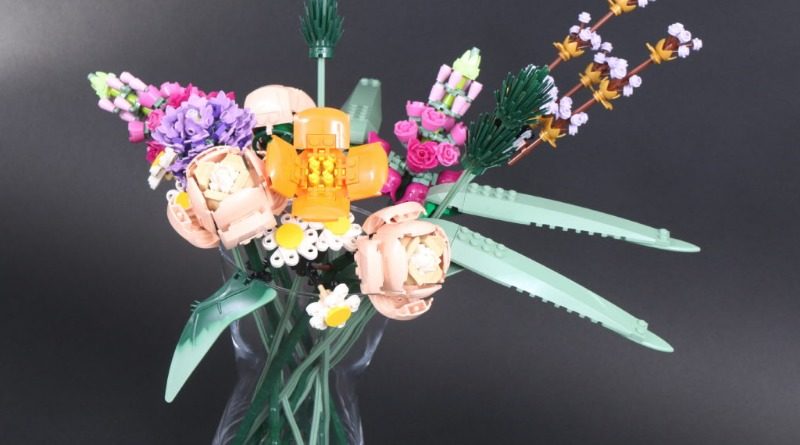 The designer of LEGO 10280 Flower Bouquet has revealed that the team originally considered including a buildable vase in the Botanical Collection set.

Speaking during a recent roundtable interview with select LEGO Fan Media (including Brick Fanatics), Anderson Grubb reflected on the bouquet’s development – and the elements that didn’t quite make the cut, including a brick-built vase and a ‘beautiful’ building technique.

Read on for the designer’s insightful answers, and if you haven’t already, make sure to check out how the LEGO Group decided which flowers to include, the biggest design challenges in putting the model together, why the set’s roses aren’t red, and how the design team were granted special permission to recolour a Technic element for 10280 Flower Bouquet.

Was there any thought given to including something to hold the flowers together, like rubber bands?

We looked at a few different possibilities for how we could hold them together. We didn’t land on anything that felt great and also didn’t feel like it was restricting people into a particular arrangement. We wanted people to have the freedom and the joy of arranging your own bouquet. [So] there was some thought about that, but ultimately, we thought it was best to let you work out how to arrange them.

Did you consider putting a buildable vase into the set?

We certainly looked at it for a bit and explored making different kinds of vases. One of the things that was a guiding principle was: ‘How can we surprise people?’ I have a number of theories about it, but for whatever reason, when we had our versions of the bouquet in brick-built vases – whether they were quite simple and elegant or decorated or whatever – versus just vases we had around the building, even in very simple things like water pitchers, people responded more to the magic with ‘Wow, is that really LEGO?’ when it was in a regular vase. It was just something that we realised is actually really helping to elevate that sense that the product is surprising you.

I have seen many people building awesome custom vases out of their own collections and finding great new ways to display them [that] I would not have thought of. I know there are people now exploring using 92177 Ship in a Bottle from LEGO Ideas to make a vase. I applaud that creativity – that’s so amazing. I love to see what people are doing. So there’s no wrong way. But for us, it came down to: ‘Let’s focus on the flowers to create a really full bouquet, then make as many people as possible do a double take when they see it sitting in a vase there.’

Is there another type of flower that you’d like to try to create?

There’s some stuff we explored that’s the most beautiful, nice piece use you’ve ever seen, and we just couldn’t fit it in with the restrictions we had. I really hope we get a chance to come back around and do it for you guys. Because I think people will go, ‘Wow, of course. Of course!’ And that’s all I can say about it.

10280 Flower Bouquet is available now at LEGO.com. If it’s temporarily out of stock in your area, sign up to our UK or US stock alerts and we’ll let you know when it’s back.