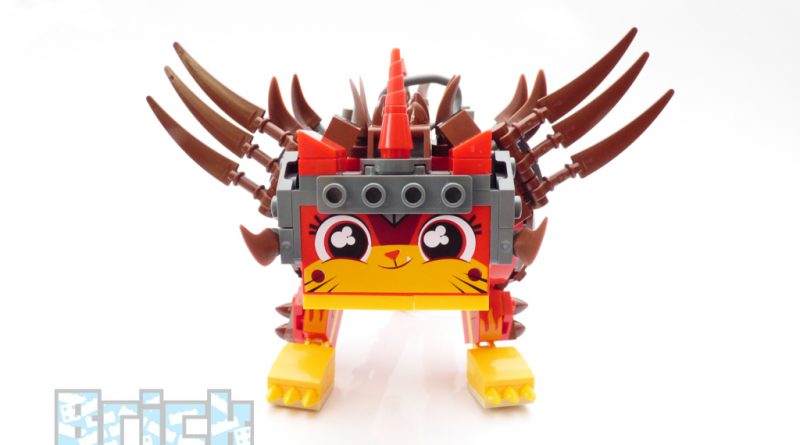 Unikitty has unleashed her inner big cat in The LEGO Movie 2: The Second Part 70827 Ultrakatty and Warrior Lucy! – will this new set bring sparkles of joy to LEGO fans?

In the brave new world that is Apolcalypseburg, the characters fans know and love from The LEGO Movie have adapted. Unikitty has perhaps undergone the greatest transformation, with her new Ultrakatty persona being a far cry from her usual 13 brick self. 70827 Ultrakatty and Warrior Lucy! Is all about building her character, with two of the movie’s other heroes and a buildable DUPLO being thrown in for good measure.

The LEGO Movie and The LEGO Batman Movie both had a key character built from LEGO elements rather than being a minifigure, represented in the sets 70807 Metalbeard’s Duel and 70904 Clayface’s Splat Attack. 70827 Ultrakatty and Warrior Lucy! continues that tradition, building Unikitty’s new battle hardened alter-ego. Any child of the 1980s will immediately recall Battle Cat from He-Man and the Masters of the Universe, who Ultrakatty is definitely reminiscent of.

Putting Ultrakatty together is a pacey build, with her shape coming together quickly. The majority of her body is made up of red, yellow and orange bricks, complemented by printed shin elements. To give her the battle-ready look, brown and grey elements are added to represent armour and the harness that seats Lucy.

When complete, the character looks great. She is full of charm, which is helped by the 1x5x2 brick that features a printed face. In fact, the set includes three alternate faces for Ultrakatty, so she can be cute, annoyed or furious – and given how the character’s mods can change, this is a very welcome feature indeed. A minifigure can either sit or stand on Ultrakatty’s back, with reigns for them to hold on to.

Mixels joints allow the build to have good posability, in particular in the case of the tail, which can be used to help Ultrakatty “stand” on her hind legs. Those same joints are used to connect the legs to the body, but hinge joints are used further down the legs which limits the poses the character can strike – but given how sturdy and well balanced the model is, the feet do not always need to be flat to the ground, so this is not much of an issue.

The little DUPLO monster included in 70827 Ultrakatty and Warrior Lucy! looks excellent. While some may prefer to be movie accurate and have authentic DUPLO blocks for their beings, it is understandable that the LEGO Group opted to avoid confusing consumers and decided not to include both in a box. This brick built version looks sleek and elegant, a smart solution to having the larger bricks made from the smaller bricks. Turning the dial at the back of its head rotates the eye.

In the first trailer for The LEGO Movie 2: The Second Part, the key takeaway was that while the world around him has been destroyed, Emmet has not changed. This is illustrated in his minifigure – a keen eye can spot slight scuff marks on the silver detailing, but other than that, this is a very, very similar Emmet to those versions found in The LEGO Movie theme.

Wyldstyle, now referred to on all of the boxes as Lucy, has adapted to Apocalypseburg, as is illustrated by her minifigure. A fantastic new hair piece incorporates her goggles, a new scarf seems right at home in a Mad Max-esque world and her torso print shows a typical outfit for the character but with added survival accessories. The “Never Stop” sign shield and crossbow add to her vibe well.

This is a genuinely inventive new build in The LEGO Movie 2: The Second Part theme, and a reminder of just how imaginative the designers get when working on these film projects. Packed full of character with a striking colour scheme, plus two must-have minifigures, 70827 Ultrakatty and Warrior Lucy! should definitely go on The LEGO Movie 2 shopping list.

70827 Ultrakatty and Warrior Lucy! is available to pre-order now at shop.lego.com. You can help support Brick Fanatics’ work by using our affiliate links.