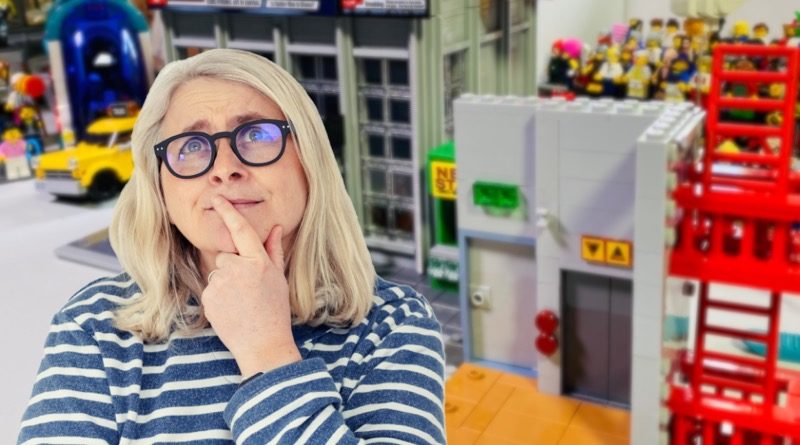 Author and screenwriter Emma Kennedy says there’s no wrong way to enjoy LEGO – whether you’re an intense speed builder or slow as molasses.

Everybody has their own way of doing things – how to eat a Twix (nibble all chocolate from the edges, thank you); dunk or no dunk; Hula Hoops can only be eaten when you have a hoop on each finger; and so it goes on. LEGO, of course, is no different: there’ll be the knollers, the sort-by-colour gang, the methodical approachers, the no-plan-whatsoever troops – but when it comes to enjoying LEGO, there are no rules.

I’m a bolts-and-braces-style builder. I like to take my own sweet time – no more than one bag a day (unless the first bag took less than 30 minutes, in which case I will consider carrying on), a proper colour-coded knoll, minifigures first and off we trot. I watched a LEGO documentary recently and there was a chap on it who absolutely, no ifs no buts, has to build any new set he gets there and then with barely time to take a breath.

There was footage of him, way into the night, his wife dutifully staring on, not unlike an operation assistant manning the implements, silently helping out as he tried to finish a proper whopper in one go. Each to their own, naturally, but I’m not sure I understood the compulsion. LEGO, for me, is a hobby I can relax to. It’s quiet and calming and soothes any given day.

Treating it as a sudden massive challenge, where you’re breaking into a sweat, head down and pumping bricks like they’re an endurance test is not my idea of fun, nor is speeding through a set at a rate of knots. Savour it! Make it last! Those big sets don’t come round all the time – eke every atom out of it.

I say this, of course, as someone who can make one box of After Eights (I am allowed one at Christmas and one at Easter, thanks for asking) last for over a month, so I’m clearly someone who can scrape every last moment of enjoyment out of any given thing and wring it dry – which, for many, will be maddening, but with LEGO, it’s part of getting my money’s worth. Big sets are super-expensive and I don’t see the point in waving them off to the corner of the LEGO shed within 24 hours of arrival.

We take things super slow over at Relax With Bricks, unusually for LEGO YouTube channels: most of the big creators are predominantly speed builders and reviewers, but at RWB we’re the tortoise in the race, passing comment as we go with the emphasis on slow storytelling, all pitched in by the AFOLWACs (Adult Fans of LEGO Who Are Chums), the viewers.

The viewers of my channel also have their own ways of enjoying LEGO. Some will wait until they’ve seen me build a set before they take the plunge to buy it; some like to build along, putting together the same bag I’m building as they’re watching; some go away when I’m building a set they’re looking forward to getting, but come back after they’ve discovered it for themselves.

And then there are others – and this might surprise you – who build no LEGO whatsoever, have never had a set and don’t want a set. They just enjoy watching the builds.

For many, RWB is simply what it says on the tin – they find it relaxing and enjoy getting involved in Club Business, but for many AFOLWACs, it’s the camaraderie of like-minded people that has evolved as time has gone by that draws them in. It’s something to unwind to, laugh at, pitch ideas into.

It’s a process of collaboration: viewers are able to make suggestions and requests, there are in-jokes and classic moments. I sometimes wonder how anyone new understands a single thing that’s going on. Don’t worry. Nobody does and it doesn’t matter.

What’s lovely, though, is that LEGO is something that can be enjoyed in a host of ways: whether you’re a quick and intense builder or someone who likes to build alone or with friends or family, or like me, as slow as molasses, it doesn’t matter. There is no right or wrong, and everyone will find their own brick rhythm. Everything, whichever way you build, is awesome.