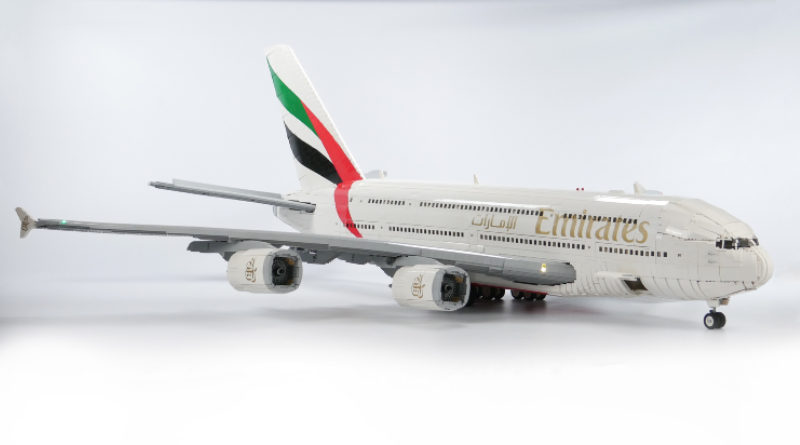 LEGO minifigures can now travel in style in this fully detailed minifigure-scale passenger plane, even including moving parts and realistic features.

BigPlanes over on YouTube has finally finished a 10-month long project as a LEGO recreation of the Emirates Airbus A380 Superjumbo is ready to take to the skies. The very aptly named channel explored the creation in a new video, exploring every inch of the interior and all the brick-built bells and whistles.

Made up of over 40,000 pieces and featuring a seven-foot wingspan, the LEGO Emirates Airbus A380 Superjumbo features two floors for passengers to explore and is controllable using the LEGO Boost app. From first class all the way to economy, there’s more than enough room for minifigures to get to their destination in comfort aboard the plane.

The highest level is dedicated to the more luxurious seating options, allowing BigPlanes the opportunity to practise their building skill by packing every utility from a bathroom to a bar. Dropping to the lower level reveals a colourful array of seating where the LEGO aeroplane seats look surprisingly comfortable.

The attention to detail makes this an authentic recreation of the actual plane, all the way down to the folding landing gear and moving engines to simulate the mechanisms of the actual jet.

Whilst not quite as big, the LEGO Group does offer a more affordable option for brick-built air travel in CITY 60262 Passenger Airplane. We can hardly imagine how big an airport would have to be to house the larger equivalent. BigPlanes has plenty of experience with LEGO aeroplanes, even passing into a previous LEGO Ideas review.