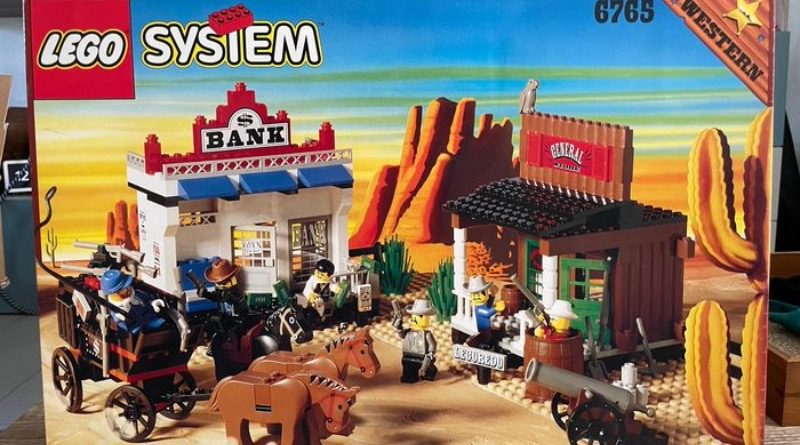 An incredibly rare copy of the retro LEGO Western set 6765 Gold City Junction is currently up for auction at Catawiki.

Brick Fanatics has partnered with Catawiki to highlight some of the auction website’s most extraordinary LEGO-related listings. This week, that extends to a perfect slice of ‘90s nostalgia, what may be the world’s largest Aquanaut minifigure, and the astoundingly short-lived Porsche owners’ pack.

Whether you’re interested in expanding your retro collection or just have one eye on LEGO odds and ends, there’s plenty to tempt you to part with your hard-earned cash at Catawiki.

It’s not often you come across a sealed example of a decades-old set – and especially in as good condition as this copy of 6765 Gold City Junction. With only slight wear on the box, it’s a near-mint example of a bygone time for the LEGO Group, which hasn’t produced Western-themed sets since 2013’s ill-fated The Lone Ranger tie-in wave.

The 350-piece 6765 Gold City Junction originally rolled into town in 1995 for around $50, but it’s rare enough now that Catawiki’s experts reckon this sealed copy will sell for roughly €310 to €350. It’s going for €178 at the time of writing, which is well below that estimate – so if you’re in the market for one of the LEGO Group’s last hurrahs into the wild west, now is a great time to strike.

If you prefer your retro LEGO tinged with a hint of exclusivity, Catawiki’s merchants have your back with this novelty oversized Aquanaut minifigure, which scales up the traditional plastic people by roughly 500%.

Standing around 20cm tall, the hard-to-find collectible was apparently produced in 1997 to promote Aquazone’s Aquanauts subtheme, which arrived in two waves across 1995 and 1996. The current bid stands at €61, with no reserve and no expert estimate – so if you’re looking for something to decorate your LEGO room without breaking the bank, this could be just the ticket.

Only a lucky few LEGO fans actually managed to get their hands on 10295 Porsche 911’s exclusive gift-with-purchase, which sold out in the UK the day before the car was even supposed to launch. And as we all know, there’s nothing like limited availability to send collectors into a frenzy.

That makes this pristine example of the Porsche owners’ pack worth highlighting, even if the art prints, card wallet and official certificate are technically very recent collectibles (at least compared to the other two items featured this week). At the moment, the promo is set to fetch at least €50 through Catawiki, but with more than four days left on the auction at the time of writing, that price could easily climb higher.

Click through to Catawiki to check out all of this week’s listings.