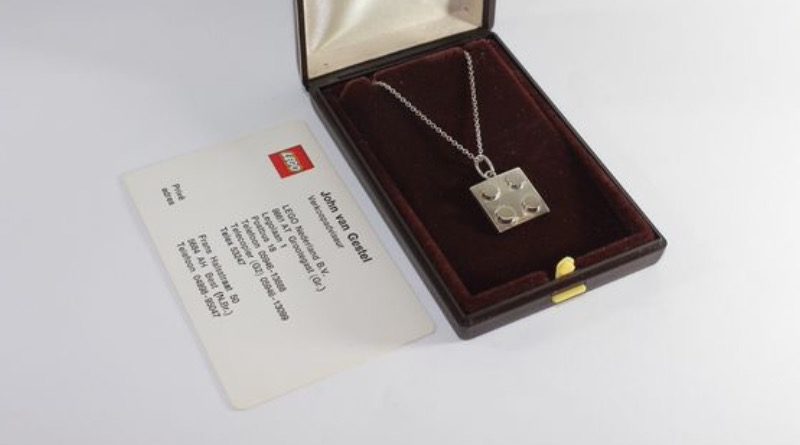 An incredibly rare official silver LEGO necklace from the 1970s is up for grabs at Catawiki this week, along with a highly-coveted modular building.

Brick Fanatics has partnered with the auction website to bring you some of the most notable LEGO-related listings at Catawiki. This week’s highlights include a piece of LEGO jewellery that was given away exclusively to select staff members at the LEGO Group, and an early set from the Modular Buildings Collection.

If you’re in the market for something truly rare and collectible, Catawiki is the place to turn to, and the lots up for auction this week fulfil that criteria nicely.

Here’s something you don’t see very often: an official LEGO pendant, as gifted to LEGO Group employees nearly 50 years ago. This particular necklace was the property of John van Gestel, a Dutch sales consultant who worked at the company’s headquarters in the Netherlands from the 1960s to the 1980s. He received the jewellery sometime between 1970 and 1979.

The sterling silver pendant – which resembles a flat 2×2 plate – was awarded to employees who had either achieved something especially notable for the company, or had been employed for 25 years. The one up for grabs here comes in its original plastic box, along with the representative’s original business card.

Bidding starts at €450, with Catawiki’s experts estimating a final sale price of €900-€1,000. That’s not exactly chump change, but this is a very valuable and rare collectable that you’re unlikely to see pop up anywhere else.

That’s not only by virtue of the Modular Buildings Collection still going strong 12 years after its release (and thus many more fans looking to retroactively complete their own collection), but also because it’s such a brilliant set in its own right.

If you count yourself among that cohort hoping to snap up a brand new, sealed copy of 10197 Fire Brigade, then you’re in luck: there’s a copy currently up for auction on Catawiki.

There’s a minor dent in the front of the box, but that won’t stop you from living like it’s 2009 when you crack the seals and tear open the bags to find fresh, untouched LEGO pieces. It’s like uncorking a fine vintage wine, only better. (Depending on who you ask, anyway.)