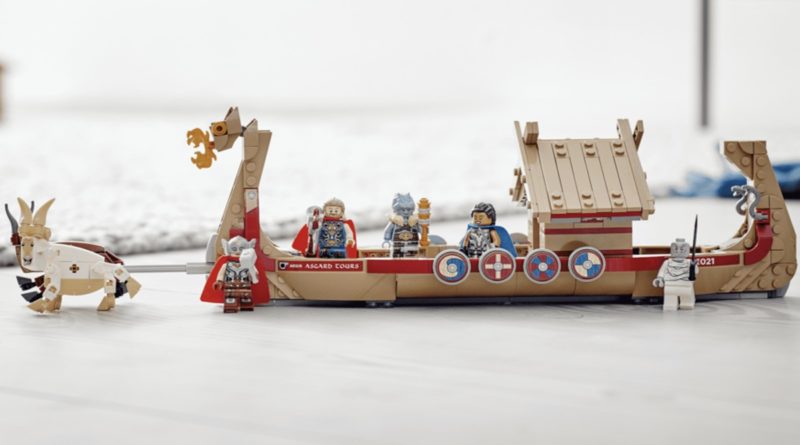 Thor: Love and Thunder is in cinemas now, and if it’s left you with a LEGO itch to scratch, here are the currently-available sets worth your attention.

Taika Waititi’s Thor-quel may be receiving mixed reviews from critics, but like most Marvel Cinematic Universe movies, it’s fertile ground for exploring through a LEGO lens. We’re unlikely to get many more direct tie-in sets beyond its current two models – LEGO Marvel will likely soon move on to the next big thing, here meaning Black Panther: Wakanda Forever – but there are already plenty of other sets ready to pad out your Thor: Love and Thunder collection.

Dive into those below, along with a reminder of both sets inspired directly by the latest Marvel movie, but fair warning: this list contains spoilers for Thor: Love and Thunder.

One of two new sets released this year to tie in with Thor: Love and Thunder, 76207 Attack on New Asgard includes the movie’s three main characters – Thor, Mighty Thor and Gorr – along with a very vague interpretation of the shadow monsters Gorr unleashes on New Asgard. (To be fair, we don’t get a great look at them on-screen, either.) All three minifigures are also included in 76208 The Goat Boat, though, so this maybe isn’t a must-have. Unless you really want that shadow monster… thing.

If there’s one LEGO Marvel Thor: Love and Thunder set to aim for, it’s 76208 The Goat Boat. You get five characters in total – including Thor, Mighty Thor, Valkyrie, Korg and Gorr – along with brick-built renditions of giant screaming goats Toothgnasher and Toothgrinder. (Here’s one instance where we’re glad sound bricks aren’t a thing.) It’s a decent build, too, recreating a ship that gets a surprising amount of screen time in the movie.

Avengers: Endgame wrapped up with Thor joining the Guardians of the Galaxy as a semi-permanent member, and the trailers for Thor: Love and Thunder led us to believe that Star-Lord, and the gang would play a pretty prominent role in the Phase 4 movie. Instead, we got a brief montage of the Norse God’s adventures with the Guardians, before they left Thor to hunt down Gorr by himself. If you do want a quick LEGO fix from their brief screen time, 76193 The Guardians’ Ship is available now.

Mjolnir made a comeback in Thor: Love and Thunder courtesy of Jane Foster, whose visit to New Asgard turned into more than a tourist trip after encountering the shattered hammer. Pieced back together to empower the good doctor, Mjolnir’s design in Thor: Love and Thunder is unfortunately not reflected in 76209 Thor’s Hammer, which is actually based on the weapon as it appeared before being destroyed in Thor: Ragnarok. Still, it’s worth a punt if you’re into movie replicas.

While more relevant versions of the characters included in 76200 Bro Thor’s New Asgard are available elsewhere, the set is still worth picking up if you’re hoping to recreate the events of Thor: Love and Thunder – especially if you pair it with 76207 Attack on New Asgard. The diorama is a solid starting point for a village under attack (a couple of kids gawking through its windows would help), but the Welcome to New Asgard sign is the icing on the cake.

Their designs may not be specifically reflective of Thor: Love and Thunder, but if you’re just after minifigures of (some of) the movie’s main characters without breaking the bank, make a beeline for 40525 Endgame Battle. For £13.49 / $14.99 / €14.99, you’ll get minifigures of Thor, Valkyrie, Korg and Miek, along with a Chitauri warrior. It’s an easy way to dip your toe into the Thor pool, but you will miss out on Mighty Thor and Gorr…

Thor: Love and Thunder is in cinemas now.