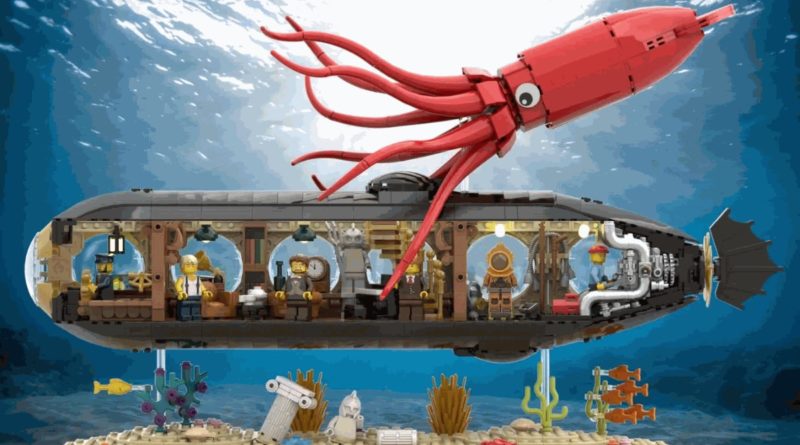 Ten thousand people want Jules Verne’s Twenty Thousand Leagues Under the Sea to be transformed into a LEGO Ideas set through the crowdsourcing platform.

It’s been a little while since any LEGO Ideas projects knocked through the 10,000-vote barrier to reach the review stage. In fact, Sebastien Esnault’s recreation of the Nautilus – the submarine featured in Jules Verne’s classic science-fiction novel – is the first to do so in two weeks, which feels like an age compared to the rate at which they were rolling through the gate before then.

That means the first 2022 review is unlikely to break any records at this point, especially given we’re just a few days away from the qualifying window closing for good. But there are still a hefty number of projects in contention, with the Nautilus bringing the total number to a respectable 39 – the second-most in any single review.

Originally described by French author Verne as ‘a very long cylinder with conical ends’ and ‘a masterpiece containing masterpieces’, the Nautilus was later realised for cinema screens in the 1954 movie 20,000 Leagues Under the Sea. Sebastien’s version is specifically inspired by the novel, however, and ‘attempts to faithfully capture the spirit of Jules Verne while allowing great playability’.

As well as the vessel itself – which has a fully accessible interior – Sebastien’s 1,753-piece pitch includes the story’s mysterious sea monster, and minifigures of Captain Nemo, Professor Aronnax, Ned Land, Conseil and the Nautilus’ First Mate. It now joins 38 other projects in the first 2022 review. Here’s the complete line-up: