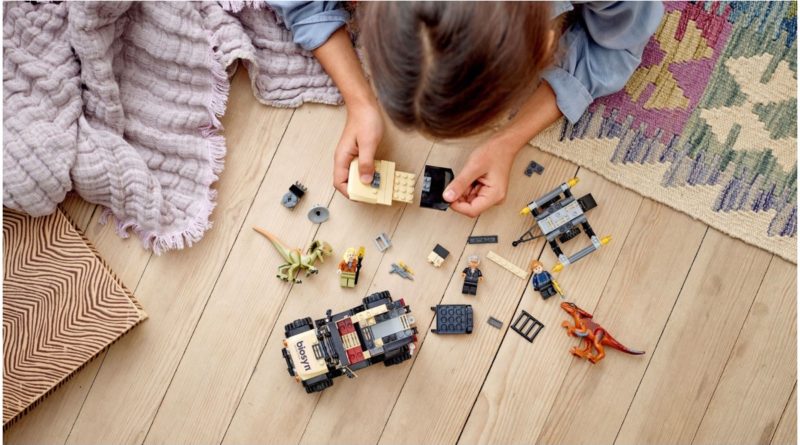 Another pair of reviews for the upcoming LEGO Jurassic World sets have debuted online, courtesy of a German retailer.

JB Spielwaren has recently posted two video reviews on its official YouTube channel, sharing a closer look at two tie-ins for Jurassic World: Dominion. The third film in the Jurassic World trilogy sees the dinosaurs leave the confines of the park and spread across the wider world. Chris Pratt and Bryce Dallas Howard reprise their roles, while old favourites like Sam Neill, Laura Dern and Jeff Goldblum all reappear in their roles from the original Jurassic Park.

As such, one of these set reviews should prove especially interesting for Jurassic World fans. 76951 Pyroraptor & Dilophosaurus Transport includes older versions of both Ellie Satler and Ian Malcom (played by Dern and Goldblum respectively) as well as Dilophosaurus and Pyroraptor figures. The review of the set examines these elements in more detail, as well as the large jeep and trailer that accompany it.

In contrast, 76943 Pteranodon Chase may be less enticing. It includes minifigures of Owen Grady and Maisie (ward of Owen) as well as a Pteranodon figure. It’s also relatively simple in its design, due to being aimed squarely at the younger LEGO fan. However, the review does highlight some interesting elements if you want a parts pack.

Both of these sets will be available for purchase from April 17, while the film which inspired them debuts on June 10. If you’re interested in the LEGO Jurassic World theme, you can also check out the review of 76945 Atrociraptor Dinosaur: Bike Chase on the JB Spielwaren channel. Yes, Atrociraptor is a real dinosaur name.